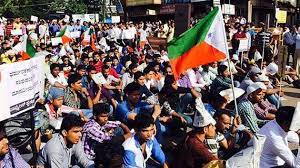 A group of Popular Front of India (PFI) activists were beaten up by locals when they tried to forcefully down the shutters of shops in Kannur as part of the hartal called by their outfit in Kerala on Friday.

A petrol bomb was hurled at the RSS office in Mattannur, Kannur during the protest against the arrest of the Popular Front of India’s state leaders. A two-member group reached on a scooter, threw the petrol bomb, and broke the window panes.

The Assam Police on Friday arrested one more leader of the Popular Front of India (PFI), it informed. According to the Additional Director General of Police, this arrested PFI leader has been identified as Dr Minarul Seikh who hailed from West Bengal and was arrested from Delhi.

As many as 14 people were arrested on charges of sedition following raids by the National Investigation Agency on the offices of the Popular Front of India (PFI) and Social Democratic Party of India (SDPI) in Karnataka, police said on Friday.

A lorry driver, who was on his way to Erode in Tamil Nadu, suffered severe injuries on his nose and eyes after the hartal supporters hurled stones and broke the glass of his vehicle in Kozhikode. “They attacked us deliberately with an intention to destroy the lorry. The vehicle was parked on the roadside when they came and attacked it. I went to a private hospital for first aid and now I am going to the government hospital for a detailed check-up,” he said

A shop, that was kept open, reportedly destroyed (PTI)

A lottery shop, kept open at Sankranthi Kavala in Kottayam, was destroyed by the hartal supporters while some freight lorries, which were on on its way from Mangaluru, were stopped and its keys were snatched away by them on a national highway in Kannur which caused blocked traffic in the area.

Police resorts to lathi-charge to disperse protesters in Kottayam

In Erattupetta town of Kottayam district, police resorted to lathi-charge to disperse hartal supporters when they tried to block the vehicles after gathering in large numbers, closed the shops and threatened the people who were travelling on private vehicles.