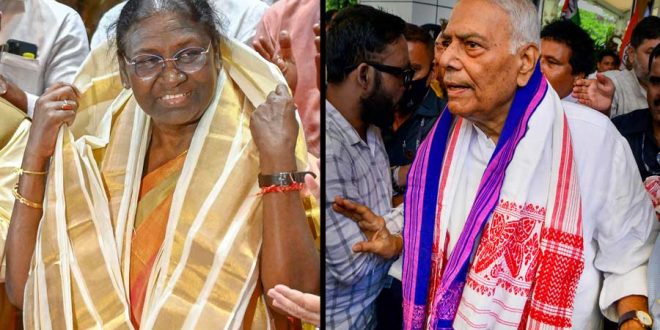 In Assam, IUDF MLA Karimuddin Barbhuiyan state that around 20 Congress MLAs from the state voted for NDA’s candidate

New Delhi ‘july 18 2022:Several legislators in states on Monday said they have cross-voted in favour of NDA nominee Droupadi Murmu by not following their party line in the presidential election.

Among them are NCP legislators in Jharkhand and Gujarat and Congress MLAs in Haryana and Odisha who said they followed the voice of their conscience.

An Akali MLA in Punjab boycotted the presidential election citing non-redressal of issues relating to the state.

In Assam, IUDF MLA Karimuddin Barbhuiyan claimed that around 20 Congress MLAs from the state voted for Murmu on Monday.

In Uttar Pradesh, Shivpal Singh Yadav also claimed that he would never support Yashwant Sinha, as he had once accused his brother and Samajwadi Party patriarch Mulayam Singh Yadav of being an “ISI agent”.

Haryana Congress MLA Kuldeep Bishnoi, who cross-voted in last month’s Rajya Sabha polls, said he has voted according to his conscience in the presidential election too.

Indicating that he supported Murmu rather than Opposition’s Yashwant Sinha, Bishnoi said in Delhi, “Like in Rajya Sabha, I have cast my vote in this election too as per my conscience”.

Voting in the presidential election is done through a secret ballot and parties cannot issue whips to their MPs and MLAs.

Congress MLA in Odisha Mohammed Moquim created a flutter by announcing that he has voted in favour of Murmu as she was a “daughter of Odisha”.

Immediately after exercising his franchise in the Assembly, the legislator from Cuttack-Barabati assembly segment said he went by his “conscience call”.

“I am an Odia. I voted in favour of Droupadi Murmu as she is a daughter of Odisha. I went by my conscience. MLAs cannot be prevented from listening to their conscience,” Moquim said.

“People of Odisha will support my move. Murmu’s victory will make me proud,” Moquim said, claiming that several people from abroad had urged him to support the “daughter of the soil”.

“NDA candidate Droupadi Murmu will get the support of at least 65 legislators in Jharkhand under any circumstance as many Congress legislators are also going to listen to their conscience and vote for her, BJP MLA Biranchi Narayan claimed.

In Gujarat, the Nationalist Congress Party MLA Kandhal Jadeja also said he voted for Murmu in the presidential election.

“I cast my vote for the BJP candidate,” he said after voting in the Assembly complex in Gandhinagar.

The Sharad Pawar-headed NCP is one of the constituents of the Congress-led opposition bloc in the country.

In 2020, the NCP had issued a show cause notice to Jadeja, the lone party MLA in Gujarat from Kutiyana seat in Porbandar, for defying the whip and cross-voting in Rajya Sabha polls.

In Punjab, Shiromani Akali Dal legislator Manpreet Singh Ayali decided to boycott the presidential poll, saying issues related to Punjab remain unresolved and he was not consulted by his party leadership before deciding to back the NDA candidate.

The Dakha MLA said he spoke to voters and workers in his constituency, and took the decision considering “sentiments of ‘Panth’ (Sikh community).

The Shiromani Akali Dal (SAD) has three legislators in the 117-member Punjab Assembly.

With regional parties like the BJD, YSRCP, BSP, TDP, JDS and SAD lending their support to Murmu in the presidential poll, cross-voting by several opposition legislators in state assemblies during polling on Monday is likely to help push her vote share further.

Some parties like Shiv Sena and JMM have already broken ranks with their allies in the UPA to support a woman tribal to become the next President of India.

The BJP is seeking to increase the total votes in favour of Murmu to above seven lakh out of a total of 10,86, 431 votes.

The new-found political bonhomie between the Suheldev Bharatiya Samaj Party (SBSP) and the BJP was also on full display in the legislative assembly in Uttar Pradesh when Samajwadi Party ally Om Prakash Rajbhar was seen accompanying Deputy Chief Minister Brajesh Pathak to cast vote in the presidential election.

SBSP MLA from Jakhanian in Ghazipur was present with Rajbhar at the time.

The SBSP chief has publicly announced his party’s vote for the NDA nominee, signalling cracks in the anti-BJP opposition alliance, which is supporting rival candidate Yashwant Sinha.

The SBSP has six MLAs, including Rajbhar, in the Uttar Pradesh assembly.