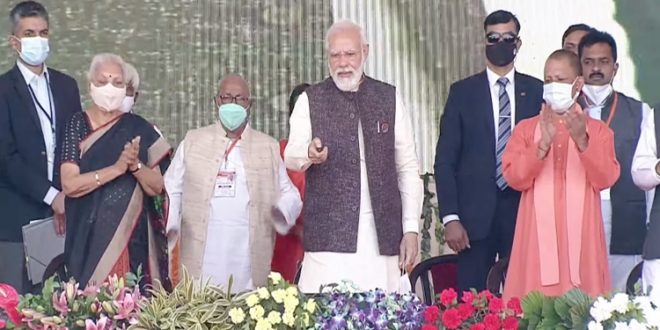 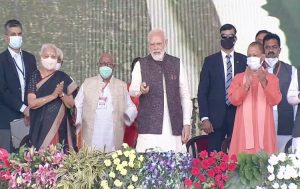 The Prime Miniter in his address said he is grateful to inaugurate the projects whose foundation stone was laid by him five years back.

Mr. Modi said today’s programme is a testimony of the fact that nothing is impossible for New India.

He said when the people of India gave me a chance to serve the nation in 2014, the production of fertilisers was inadequate. The country faced the acute crisis. He said the government has taken various steps to end this crisis in the country.

He said these projects will be helpful in generating employment in the region.

Earlier, Uttar Pradesh Chief Minister in his address said the BJP government has made the impossible, possible by inaugurating the fertiliser plant which was lying shut for 30 years. He said, today’s programme is a testimony of ‘Modi hai to Mumkin hai’ slogan.

The Chief Minister said the Fertiliser Plant was closed on 10th June 1990. The previous governments did not pay any heed to restart this plant. He said the plant is not only revived but also has an enhanced capacity to produce fertiliser.

He said Gorakhpur and Eastern UP was seen as a region infested with diseases. Child mortality due to Japanese Encephalitis was very high. Now, AIIMS and the regional centre of ICMR will help in improving the scenario in the Purvanchal.

The Chief Minister said, health infrastructure has improved under the BJP government. He said, before 2014, there was only one Medical College in Gorakhpur in the Purvanchal. But now, Medical colleges are functioning in Deoria, Kushinagar, Siddharthanagar, Basti, Bahraich and Ayodhya districts.

He also said, till 2014 there were only 17 Medical colleges in 12 districts in the state but now 59 medical Colleges are in Uttar Pradesh.

The Chief Minister said the world has appreciated the Covid management in India under Prime Minister Narendra Modi. He said Uttar Pradesh has successfully administered 17 crore doses of Covid vaccine.

The foundation stone of the two mega projects, the Fertiliser Plant and the AIIMS, inaugurated today was laid by Prime Minister Narendra Modi in 2016. Both these projects are ready within five years. The foundation stone of the regional centre of ICMR was laid three years back by the then Union Health Minister and Chief Minister Yogi Adityanath. These three development projects are seen as a game changer in Purvanchal. The fertiliser plant will prove instrumental in enhancing farmer’s income by supplying them ample urea fertiliser. The plant will serve the needs of the farmers not only in the Purvanchal but also the adjoining Bihar and other states.

AIIMS, with its world class facilities will enhance the health infrastructure in the eastern Uttar Pradesh. It will serve a big population of Bihar and the Tarai region as well. The regional centre of ICMR has already been a boon to the region. This centre has been of major help in eradicating Japanese Encephalitis from the Purvanchal. With its new building in BRD Medical College, Gorakhpur, the centre is now fully functional.