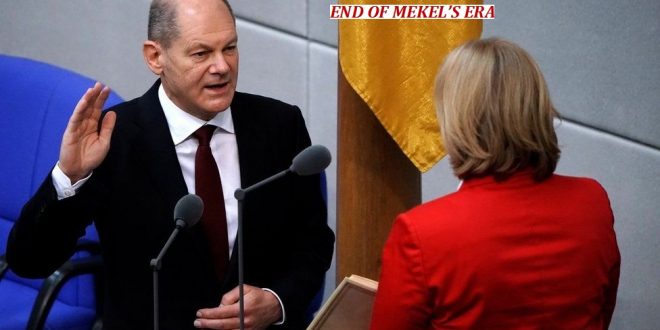 BERLIN: Social Democrat Olaf Scholz has been sworn in as Germany’s new Chancellor, ending 16 years of conservative rule under Angela Merkel and paving the way for a pro-European coalition government that has promised to boost green investment. 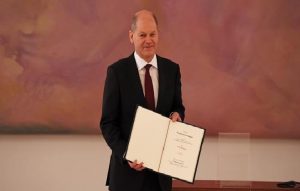 Scholz, 63, who served as vice chancellor and finance minister in Merkel’s outgoing government, got a clear majority on Wednesday of 395 votes from lawmakers in the Bundestag lower house of parliament, Bundestag President Baerbel Bas said.

There were six abstentions.

Scholz exchanged fist bumps with lawmakers from across the political spectrum. He nodded wearing a face mask and waved as he received a standing ovation, receiving bouquets of flowers from the leaders of the parliamentary groups.

He was formally named as chancellor by Germany’s president and sworn in by the speaker of parliament later on Wednesday.

Merkel, 67, who is no longer a member of parliament, looked on from the spectators’ gallery as parliament voted. She has said she will not seek another political role after shepherding Germany through a turbulent era. She has not disclosed any future plans but said earlier this year that she will take time to read and sleep, “and then let’s see where I show up”. 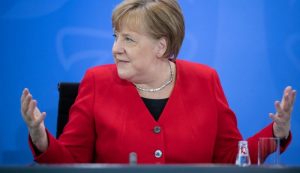 After being nominated by President Frank-Walter Steinmeier in Bellevue Palace, Scholz returned to parliament to take the oath of office in front of the lawmakers.

Merkel is handing over the chancellery to the new leader of Europe’s largest economy, which is facing a brutal fourth wave of coronavirus infections.

With his down-to-earth and no-nonsense manner, Scholz has positioned himself as Merkel’s natural successor and a safe pair of hands to steer Germany through challenges ranging from tackling the climate crisis to dealing with a more confrontational Russia and a more assertive China.

Step Vaessen, reporting from Berlin, said it was “an historic day for Germany”.

“A whole generation grew up with Angela Merkel,” she said. “Scholz is seen as calm and charismatic. He has promised change.”

French President Emmanuel Macron congratulated Scholz, pledging “we will write the next chapter together” while EU chief Ursula von der Leyen said she looked forward to working together for a “strong Europe”. 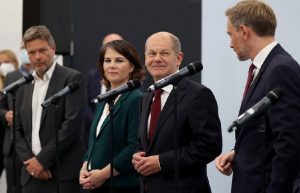 Scholz will lead an unprecedented three-way ruling coalition on the federal level with the pro-spending, environmentalist Greens and the fiscally more conservative, libertarian Free Democrats (FDP), unlikely political bedfellows in the past.

The new government aims to step up efforts against climate change by expanding the use of renewable energy and bringing Germany’s exit from coal-fired power forward from 2038, ideally to 2030. It also wants to do more to modernize the country, including improving its notoriously poor cellphone and internet networks.

It plans more liberal social policies, including legalizing the sale of cannabis for recreational 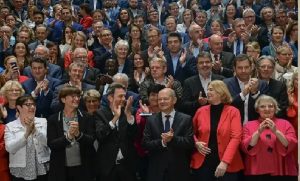 purposes and easing the path to German citizenship while pledging greater efforts to deport immigrants who do not win asylum. The coalition partners want to lower the voting age in national elections from 18 to 16.

The government also plans to increase Germany’s minimum wage to 12 euros ($13.50) per hour from the current 9.60 euros, which Scholz has said “means a wage increase for 10 million”. And the coalition also pledged to get 400,000 new apartments per year built in an effort to curb rising rental prices.

Scholz has signaled continuity in foreign policy, saying the government would stand up for a strong European Union and nurture the transatlantic alliance. (Int’l News Desk)