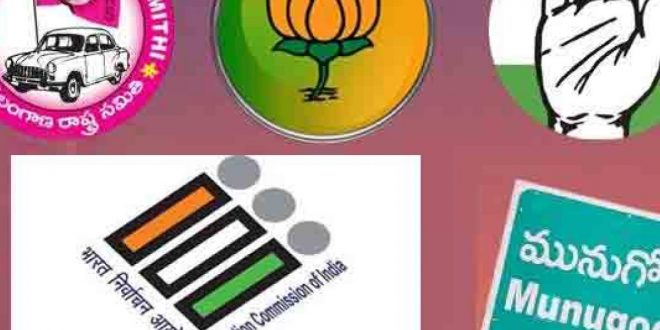 Hyderabad’Nov 2’22-Munugode Byelections 2022:  The stage is set for voting for the byelections to the Munugode Assembly constituency in Nalgonda district of  Telangana which will be held to held on Thursday (November 3). The bypolls are considered to be crucial polls for the three main parties in the State – ruling TRS, opposition BJP and the Congress and will be testing time for the three parties which could also decide the course for the General Elections to be held in 2023.

-The Election Commission has made elaborate arrangements for polling which will be held from 7 am to 6 pm.

Over 2.41 lakh voters would exercise their franchise at 298 polling stations spread across the constituency.

-Around 3,366 state police and 15 companies of central security personnel have been deployed for security.

-Webcasting would be done from all the polling stations

-Around  47 candidates are in the fray. But the main contestants are former MLA Komatireddy Raj Gopal Reddy (BJP), former MLA Kusukuntla Prabhakar Reddy of TRS, and Congress’ Palvai Sravanthi.

The TRS aims which have plans to go big in National politics as the BRS party, claims that the welfare schemes like Rythu and Dalit Bandhu will get them through. The TRS also has the support of the CPI and CPI(M) who are not keen on the BJP winning. Munugode had been a Left stronghold with CPI winning the segment in 1985, 1989, 1994, 2004, and 2009.

The Congress which is struggling for its existence in the State after its dismal performance in the 2014 and 2018 Assembly elections and the subsequent bypolls is trying to revive its sagging fortunes through Palvai Sravanthi.

In the 2018 Munugode Assembly Elections Komatireddy Rajgopal Reddy polled 97,239 votes and was ahead of TSR Candidate  Kusukuntla Prabhakar Reddy who garnered 74,687 votes.  It is clear that the battle is between the TRS and BJP  and all eyes are on Munugode this year.

The bypoll was necessitated by the resignation of sitting Congress MLA Komatireddy Raj Gopal Reddy from the Congress party and his post in August. He joined the BJP and is seeking re-election. The counting of votes would be taken up on November 6.