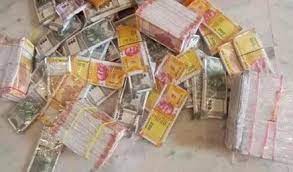 Phani Kumar works as a collection agent for Srinivas. He took Rs. 70 lakh from Srinivas and the remaining Rs. 57 lakh from Vishwanath and was on way to hand it over to an unknown person at Kavadiguda. On information, he was caught at Narayanguda while he was on way to Kavadiguda on a scooter,” said sub inspector, S Sai Kiran.

The three persons could not show any documents in support of the sources of the amount.

The amount was seized and handed over along with the three persons to Narayanguda police who booked a case.
Share
Previous Munugode Bypolls Live Updates: Stage Set For Voting Tomorrow
Next Set up anti-drug committees in all institutions:CP  CV Anand