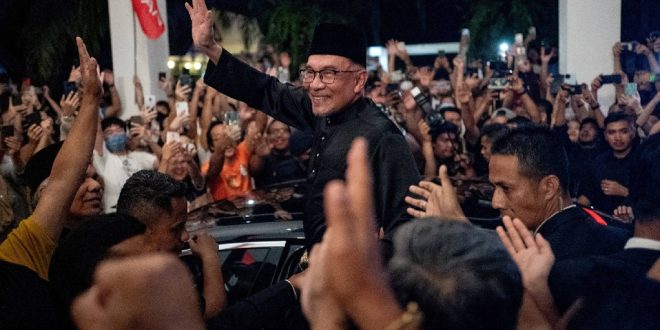 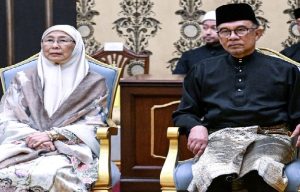 KUALA LUMPUR: For Anwar Ibrahim’s supporters, his appointment as Malaysia’s new prime minister has been a long time coming.

The 75-year-old opposition leader secured the Southeast Asian country’s top job on Thursday after its king intervened in the political impasse that followed last weekend’s inconclusive general election and named him the country’s 10th prime minister.

It was a remarkable comeback for Anwar, who has spent nearly three decades in the opposition, including 10 years in prison on sodomy and corruption charges that he claims were politically motivated

“I was at the airport when the announcement of our 10th PM was made,” wrote Twitter user @itsraenu_. “I heard people scream and saw people smile from ear to ear.”

“Anwar’s resurgence is something to be inspired of for many coming generations to come,” wrote Twitter user @CHKen_2.  “Waited 24 years for this, went through all sorts of political backstabbing and even having to endure imprisonment but never gave up on his principles. Keep on believing.” 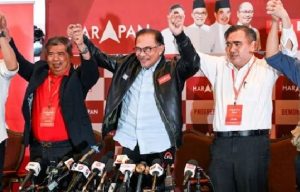 A former deputy prime minister, Anwar looked set to take the top job in 1998 before he was sacked from the government after falling out with then-Prime Minister Mahathir Mohamad over his handling of the Asian financial crisis. Anwar was then accused of sodomy, a crime in Malaysia and corruption. Tens of thousands took to the streets in defence of the charismatic leader and his calls for “reformasi” or reform but he was jailed the following year.

Anwar managed to secure an acquittal on the sodomy charge in 2004 but was jailed again in 2015 on similar allegations. From jail in 2018, he coordinated an opposition alliance and even joined forces with his former mentor-turned-foe Mahathir to topple then-Prime Minister Najib Razak amid the multibillion-dollar corruption scandal at state fund 1MDB.

At the time, Anwar was named the official prime minister-in-waiting but was again denied the post when renewed clashes with Mahathir brought down their government. Amid the instability, Najib’s United Malays National Organization (UMNO), which voters had roundly rejected in the 2018 vote, returned to government, although Najib himself was jailed after the first of five trials linked to 1MDB.

For Anwar’s supporters, his rise to the top after decades of turmoil is testament to the power of persistence. 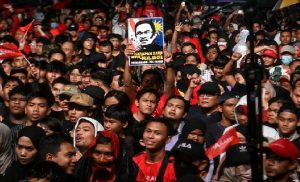 Anwar “taught us to never give up on dreams”, wrote Twitter user @aidarazman. “PM at 75 years old? We have so much more to experience.”

“Hard not to get emotional watching this, knowing the challenges he and his family have faced,” @edwardkuruvilla wrote, posting a picture of Anwar’s oath-taking ceremony. “May your tenure be a great one,” he added.

Many of the new leader’s supporters also poked fun at Mahathir, who is now 97 and is blamed for thwarting Anwar’s ambitions. The former prime minister failed to defend his seat in Saturday’s election, failing to win even the 12.5 percent of votes required to get back the thousands of Malaysian ringgit he paid as an electoral deposit.

“Don’t forget, Dr Mahathir not only lived to see his deposit wiped out in an election and his sole political purpose of the last 30 years, blocking Anwar Ibrahim from being PM, finally happen … but as a former prime minister, he will be invited to attend Anwar’s swearing-in too,” wrote Twitter user @amirulruslan. 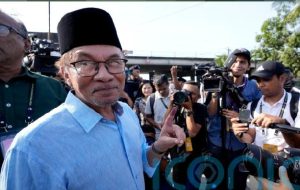 “What a year,” wrote @mhmgrgie. “Najib goes to jail. Mahathir loses his deposit and now Anwar is PM. Historic would be an understatement …”

Anwar’s supporters also took a moment to appreciate his wife, Wan Azizah Wan Ismail, who they say has been instrumental in his rise.

Twitter user @JustinTWJ described the 69-year-old as the “Mother of Reformasi”, noting her role in leading Anwar’s Reformasi movement after his jailing and her role in mobilising the alliance that brought down Najib. “I can’t imagine the strength she has to do it all.”

Twitter user @tsimitha wrote: “This incredible woman who was the heart of the Reformasi movement made this day happen! Women are born leaders!”

For his part, Anwar said on Twitter that he would shoulder the duties entrusted to him with the “utmost humility”.

“Without your support and effort, we would not be able to achieve this today,” he added.