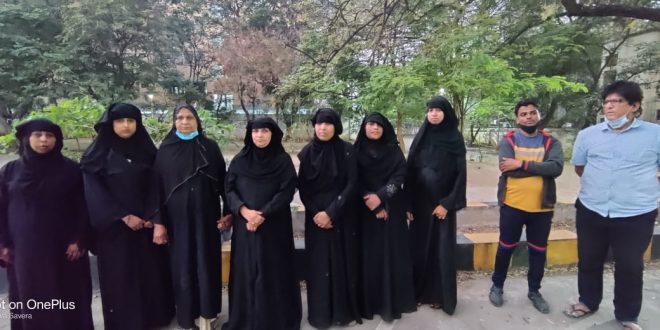 Hyderabad’24 jan’2022(PMI)The Police of Balapur have arrested nine accused persons who are involved in Human Trafficking for the purpose of marriage.

Name of the Accused:

Facts of the case,

On 23.01.2022 at 1630 hours Sri B.Srikanth Sub-Inspector of Police, PS Balapur, Rachakonda, received credible information about Human trafficking near H.No. 17-182, Bilal colony, Beside Habeeb Function Hall, Errakunta, Balapur Mandal, Ranga Reddy District. Upon which he informed the same to the superior officers and obtained permission to conducted raid at the said place along with SHE team Rachakonda and apprehended 09 accused persons by taking them into custody.

Further, on tactful interrogation it is revealed that A2 to A9 are all residents of Balapur Mandal, Ranga Reddy District and were mediating the sale of victim girl to accused A1 who is from Mumbai and known person to A2. Six years back accused A1’s got divorced from his wife since then A1 desired to bring another woman to look after his needs and he approached accused A2.  Later A2 to A7 who are mediators who have contacted A8 who is the mother of the victim and A9 grandmother of the victim and convince to sell her daughter/victim. After deciding to sell the victim girl for Rs 5 lakhs, thereafter A2 to A9 contacted A1 and discussed about their willingness to sell the victim.

Thereafter about 03 months back accused A1 came to A3’s house to purchase the victim, but they failed to finalise the price, due to difference in sale amount A1 went away to Mumbai without any deal. After few weeks A8’s brother met with an accident, in this regard A8 was in need of huge money and due to her poor financial problems, she decided to sell her daughter for less price due to this the accused persons A2 to A9 again called A1 and offered to sell the victim girl for less amount, then on 23.01.2022 the A1 came to A3’s house and while all A1 to A9 are negating the deal for R 3Lakhs, meanwhile, on reliable information the Balapur police along with SHE team Rachakonda conducted raid and caught the A1 to A9 red-handedly.