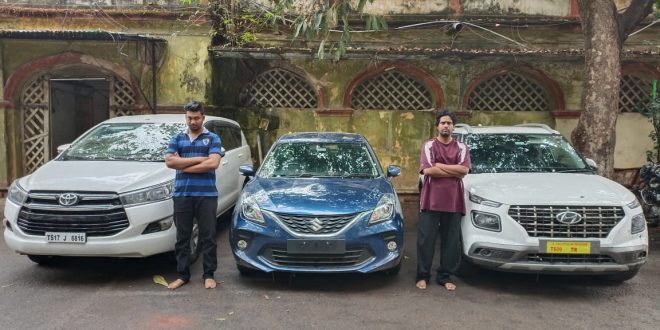 2. Mohd Hussain s/o Mohd Ibrahim, Age 21 yrs Occ: Student R/o Kishan Bagh, Hyderabad.
Property seized:-
1. Innova Crysta (TS 17 J 6816),2. Hyundai Venue (TS 05 FK 7499),3. Maruthi Suzuki Baleno ( TS 07 HX 0669),4. Cell Phone – make Vivo.Previous cases of Accused Mohd Salman @ Don Salman:
Sl.No Crime Number Police Station
1 324/2020 U/S 406,420,506 IPC Saidabad2 384/2020 U/S 403,406,420 IPC Saidabad
Brief facts of the accused.
The accused Mohd Salman @ Don leading his life with his family members at Kishan Bagh. At present he is working as a Private car driver. Due to pandemic and lock down the travel business was not well and he is not comfortable with the earnings. He hatched a plan to commit offences in the name of rent. As per his plan he started taking four wheelers on rented basis from the owners by assuring them that he will provide good rents. Believing his version car owners engage their cars on rental basic. After receiving the cars Salman mortgage or sale the same to unknown persons without knowledge/consent of the owners in less amounts. In this process in the year, 2020 he was arrested by Saidabad police and went to jail. After releasing from jail, again he met with his friend Md. Hussain and hatched a plan to commit offences to earn easy money. As per their plan they committed three offences in the limits of Asif Nagar, Uppal and Chandrayangutta police stations and cheated the owners as well as purchasers.

The above arrest was made under the supervision of Sri. S. Raghavendra, Inspector of police, South Zone Taskforce and SI’s Sri. V. Narender, Prathap Reddy, V. Laxmaiah and the Staff of South Zone Task Force, Hyderabad city along with Asif Nagar Police.(press media of india)

Share
Previous Indian Army Day: Saluting the valour of those who serve the nation ‘forever
Next Calls grow for UK PM to resign over lockdown ‘parties’