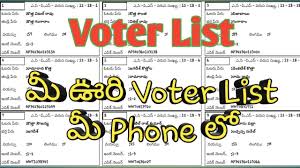 GHMC citizens asked to verify their names in voter list

Hyderabad, Feb.1 (PMI): M. Dana Kishore, DEO & GHMC Commissioner, today appealed to the citizens of GHMC area to utilize opportunity to verify their names / to enroll new voters during special campaign being organized on February 3 at all the polling booths in the city. The citizens can also call tollfree No 1950 for information, suggestions, feedback and complaints about elections, he added.

Dana Kishore held a review meeting with the Electoral Registration Officers of 15 Assembly Constituencies of Hyderabad District and reviewed the progress of Election related works. The EROs appraised the work being done on verification of voter list i.e. field verification of new enrollment applications, accepted / rejected / pending and disposal and re-verification of deleted voters. The DEO instructed the EROs to personally inspect the verification done by the AEROs, Supervisors duly following the procedure given by the Election Commission. The DEO said he would personally inspect 2% on verification done by the EROs as per instructions given by the Commission. The DEO & Commissioner said Special Observers will inspect 20% of polling booths and verify the progress of work and instructed the EROs to personally inspect the voter list where there was abnormal enrollment or deletions.