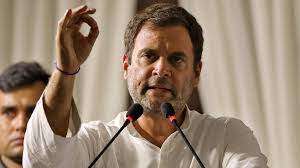 Rahul Gandhi in a tweet said, “Neither Modiji speak truth nor he allows anyone they have been saying falsely that no one died due to oxygen shortage, I have already said that not five lakhs but 40 lakh Indians have lost their lives.”

He said that the Prime Minister should give Rs 4 lakhs to every family who died due to Covid. Meanwhile, India has shared its concerns with the methodology along with other member states through a series of formal communications, including six letters issued to the World Health Organisation, said the Union Health Ministry in response to New York Times article titled “India Is Stalling the WHO’s Efforts to Make Global Covid Death Toll Public” dated April 16, 2022.

“India has been in regular and in-depth technical exchange with WHO on the issue. The analysis, while using mortality figures directly obtained from Tier -I set of countries, uses a mathematical modelling process for Tier II countries (which includes India). India’s basic objection has not been with the result (whatever they might have been) but rather the methodology adopted for the same”, said the health ministry in a statement.

The ministry has raised the question of how the statistical model projects estimates for a country of geographical size and population of India and also fits in with other countries which have smaller populations. Such one size fits all approaches and models which are true for smaller countries like Tunisia may not be applicable to India with a population of 1.3 billion. The WHO is yet to share the confidence interval for the present statistical model across various countries said the ministry.

“The model gives two highly different sets of excess mortality estimates when using the data from Tier I countries and when using unverified data from 18 Indian states. Such a wide variation in estimates raises concerns about the validity and accuracy of such a modelling exercise”, the ministry said.