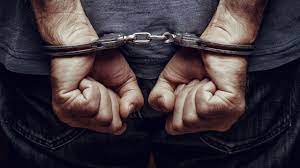 Hyderabad: April 17 Umesh Karthik, who was allegedly involved in five chain snatching cases in Hyderabad, Rachakonda, and Cyberabad in January, was arrested and brought on transit remand from Gujarat.

The Gujarat police had arrested him in connection with cases booked against him thereafter being alerted by the Hyderabad police about his presence there. The Telangana police had formed special teams to nab Karthik after he allegedly committed chain snatching cases in the three commissioners on a single day before escaping.

The Petbasheerabad police arrested and brought him on a transit remand from Gujarat, after which he was produced before the court and remanded here.
Share
Previous Two killed, two injured in car accident on ORR
Next Citing WHO report, Rahul Gandhi says govt hiding data on Covid deaths