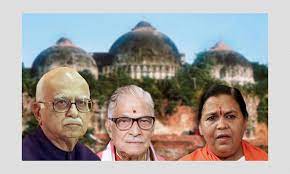 Lucknow’Nov.9 .2022- The Allahabad High Court on Wednesday dismissed a plea challenging the acquittal of 32 accused including former deputy prime minister L K Advani in the Babri mosque demolition case on the ground of maintainability. 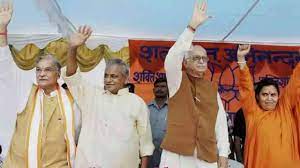 The duo contended in the petition that they were witnesses in the trial against the accused and victims of the demolition of the disputed structure.

In its objection, the state government and the CBI had stressed that the two appellants were not complainants or victims in the case and as such they cannot appeal as a stranger against the verdict of the trial court.

After hearing the arguments of the parties, the bench reserved its order on October 31

The Babri mosque was demolished by karsewaks’ on December 6, 1992. After a long legal battle, the special CBI court on September 30, 2020 pronounced the judgment in the criminal trial and acquitted all the accused.

The trial judge had refused to believe newspaper cuttings and video clips as evidence as the originals of the same were not produced, while the entire edifice of the case rested on these pieces of documentary evidence.

The trial judge had also held that the CBI could not produce any evidence that the accused had a meeting of mind with karsewaks who demolished the structure.

Assailing the findings of the trial court, the appellants have pleaded that the trial court committed an error in not convicting the accused persons, whereas ample evidence was on record.

In the plea, the appellants have urged that the judgment of September 30, 2020 be set aside.

On September 5, the CBI had filed a written preliminary objection against the maintainability of the appeal. The appellants then filed their rejoinder in the court and concluded their arguments.