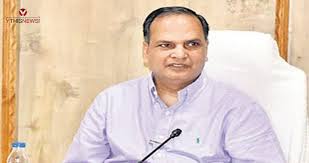 The Union official held talks with Joshi and officials of Agriculture and others at the Secretariat here on the proposed farmers’ scheme by the Centre. Joshi said Vasudha Mishra explained about the Central scheme that will benefit the farmers across the country. The Centre was planning to distribute Rs 6,000 to each farmer as part of the new scheme and the State government will have to implement it properly.

Vasudha Mishra also discussed about the implementation of Rythu Bandhu scheme, plan and implementation and benefits to the farmers and its effect at field level. The flagship program of Rythu Bandhu was being replicated by many other States and the Centre was also adopting a similar scheme to help the farmers to overcome the farm-related problems, mainly financial investment.