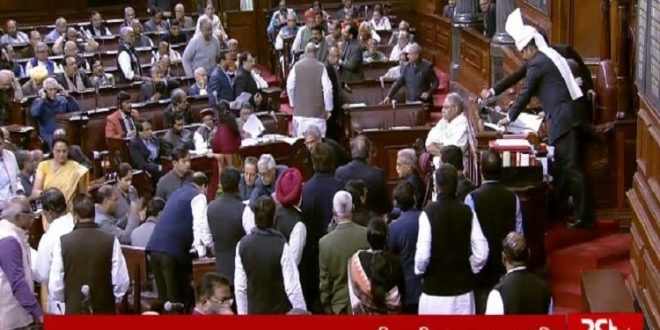 The Rajya Sabha is currently holding a discussion on the Constitution (124th Amendment) Bill, 2019 to provide for 10 per cent reservation in government jobs and admission in higher educational institutions to economically weaker people among upper castes.

After moving the bill for discussion, Social Justice and Empowerment Minister Thaawarchand Gehlot said it aims at economic and educational empowerment of the intended beneficiaries.

He rejected the allegation that the bill has been brought in a hurry, saying it was a long pending demand and government wants to deliver justice.

Participating in the discussion, Anand Sharma of the Congress said his party supports the bill, but questioned its timing.

Supporting the bill, Ram Gopal Yadav of Samajwadi Party demanded that OBCs should now be given 54 per cent reservation and SCs and STs quota increased to 25 per cent. He also sought reservation for Muslims, saying their condition is worse than the Dalits.

AIADMK member Navneet Krishnan opposed the bill, saying it is unconstitutional and legally untenable. Later, the AIADMK members staged a walkout from the House in protest over the bill.

Derek O Brien of the Trinamool Congress raised doubts over the bill passing legal scrutiny. He alleged that the government failed to fulfil its promise on job creation and the bill is an acknowledgement of its guilt.

Prasanna Acharya of BJD and RCP Singh of JD(U) supported the bill.

RJD member Manoj Jha opposed the bill alleging that it is against the basic structure of the Constitution.

DMK member Kanimozhi also opposed the bill saying the government has taken a unilateral decision which she said is a mockery of the Constitution.

Anil Desai of Shiv Sena supported the bill but asked whether it will stand legal scrutiny.

Making an intervention in the discussion, Law and Justice Minister Ravi Shankar Prasad said Parliament has the right to make Constitutional amendments.

He assured that there will not be any changes to the existing reservation for OBCs, SCs and STs after the passing of the Constitutional (Amendment), Bill. He said the states will have the freedom to decide on income criterion of beneficiaries under the bill.