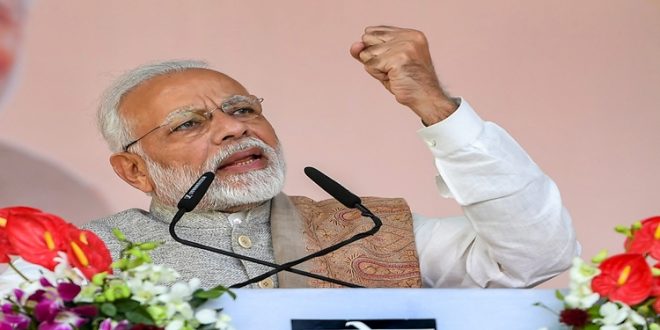 The government wants to ensure that the poor have access to all opportunities, Prime Minister Narendra Modi said on Wednesday.

Addressing a rally at Kothi Meena Bazar in Agra, he said the Lok Sabha on Tuesday passed the historic 124th Constitution Amendment Bill that provides 10 per cent reservation in jobs and educational institutions for the general category people.

Mr. Modi said it is a very important step as it gives chances for development of all economically deprived people of the country. He said this amendment does not hit the interests of the Scheduled Caste, Scheduled Tribes and Other Backward Classes.

Prime Minister also accused the opposition of spreading rumours and trying to divide people to serve their vested interests.

Calling upon the people to defeat this move by the opposition parties, he said that they are uniting to survive and safeguard each-other interests.

Without naming any political party, the Prime Minister said that in their greed for power they have forgotten their old animosity to remove BJP from power.

These include Ganga Jal project to improve drinking water supply in Agra, upgradation of SN Medical College there and setting up Integrated Command and Control Centre for Agra Smart City.

Prime Minister said the upgradation of the hospital will result in the creation of 100 maternity beds for women of weaker section of the society. He said the network of the Command and Control Centre will give a fillip to the tourism industry and generate employment for the youth.

The Prime Minister also spoke about Ayushman Bharat scheme which within a few days of launching benefited about seven lakh poor people.

He also led the foundation stone of a sewerage network project under Amrut Scheme to provide improved sanitation facility in 50 thousand houses of Agra.