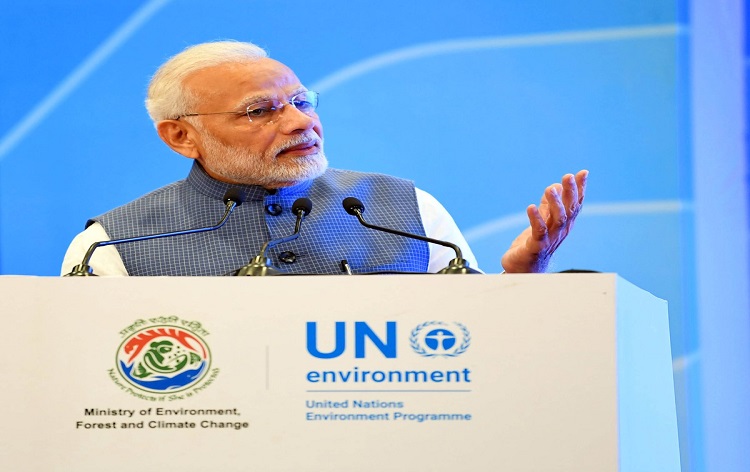 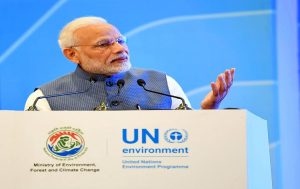 Delhi oct 4(pmi)Prime Minister Narendra Modi has underlined the need to talk, write, debate, discuss and deliberate as much as possible on questions relating to the environment. At the same time, he said, it is vital to encourage research and innovation on subjects relating to the environment and this is when more people will know about the pressing challenges and ways to mitigate them.

In an article published in national dailies today, Mr. Modi said, while the world is talking about climate change, the call for climate justice has also reverberated from India.

He said climate justice is about safeguarding the rights and interests of the poor and marginalized sections of society, who are often the biggest sufferers from the menace of climate change. He said India’s pro-activeness is seen internationally and it makes everybody proud that India remained at the forefront of the COP-21 negotiations in Paris in 2015. In March 2018, world leaders of several countries converged in New Delhi to mark the start of the international Solar alliance, an endeavour to harness the rich potential of solar energy and bring together all nations that are blessed with solar power.

The Prime Minister said India is devoting unparalleled attention to new and renewable sources of energy and added that over the last four years, this sector has become more accessible and affordable. Citing an example, Mr Modi said, Ujala Yojana has led to the distribution of nearly 31 crore LED bulbs. The costs of LED bulbs have reduced and so have the electricity bills and the “C” omissions. Referring to Ujjwala Yojana, the Prime Minister said the programme has significantly reduced indoor air pollution due to unhealthy cooking practices that were causing respiratory diseases. He said till date, over five crore Ujjwala connections have been distributed, thus ensuring a better and cleaner life for the women and their families.

The Prime Minister said India has integrated the objectives of skill India in the environment sector and launched schemes, including the Green Skill Development Programme, for skilling about 7 million youth in environment, forestry, wild life and climate change sectors by 2021. He said the program will go a long way in creating numerous opportunities for skilled jobs and entrepreneurships in the environment life. The Prime Minister said the 130 crore people in India are proactive and at the forefront of working towards a cleaner and greener environment.

Referring to Swachh Bharat Mission, Mr Modi said it is directly linked to a sustainable future. He said over 85 million households have now access to toilets for the first time. Over 400 million Indians no longer have to defecate in the open. He said sanitation coverage is up from 39 per cent to 95 per cent. These are landmark efforts in the quest of reducing the strain on the natural surroundings.

Mr Modi said India is moving at a quick pace in cleaning its rivers. The Ganga, which is India’s lifeline, had become polluted in several parts. The Namami Gange Mission is changing the historical wrong with the emphasis being given to proper treatment of sewage.

The Prime Minister said he was extremely humbled to receive the Champions of Earth award by the United Nations. He said the award is not for an individual. Instead it is recognition of Indian culture and values, which have always placed emphasis on living in harmony with Mother Nature. He said it was a proud moment for every Indian to India’s proactive role in mitigating climate change being acknowledged and appreciated by the United Nations Secretary General, Antonio Guterres and Erik Solheim, the Executive Director of UNEP.

The Prime Minister recalled that Mahatma Gandhi wrote extensively on the environment and even practiced a lifestyle where compassion towards the environment was essential. He said Gandhi propounded the Doctrine of Trusteeship, which places the onus on the present generation to ensure that the coming generations inherit a clean planet. He also called for sustainable consumption so that the world does not face a resource crunch.

Post Views: 251
Share
Previous Muharram procession was taken out amid Lamentation and Mourning
Next Supreme Court allows deportation of 7 Rohingyas to Myanmar