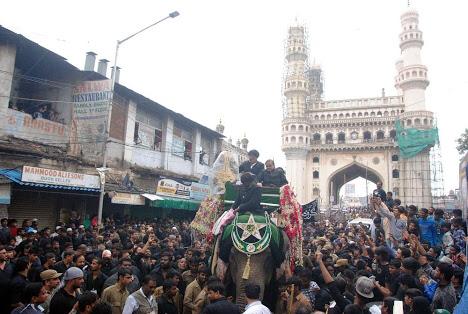 Muharram procession was taken out amid Lamentation and Mourning

admin September 23, 2018 Hyderabad, National, Top News Comments Off on Muharram procession was taken out amid Lamentation and Mourning 1,782 Views 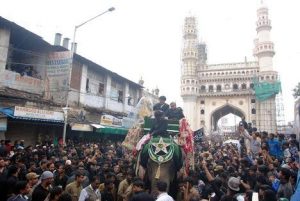 Hyderabad 23 Sep (Newslines): The historical Bibi ka Alam was taken out in procession from Alawae Bibi, Dabeerpura in the old city on the day of Ashura (10th of Muharram) by thousand of mourners (Azadar) preforming Matam (self-flagellation) and netizens irrespective of caste, creed and religion paid their homage to the Imam Hussainas , the grandson of Prophet MuhammadS.A.W.S .

After performance of Majlise e Aza, which was addressed by Allama Aijaz Farroq and Matam performed by azadar’s of Grouhe Sahidae Shabbir lead by Najaf Ali Shoukat(journalist), the historic Alam was taken out amidst momentus Seena Zani, Khama Zani and tears rolling out from their eyes at Sharp 1:00pm. Grouhe Shaidae Abul Fazal and Grouhe Hussaini also offered their homage by performing Khooni matam. The Azadars and Matamdars of the Shia community rejected the call made by Mir Saber Ali (Anjuman e Masoomeen) and Haneef Ali (BJP) to vacate Alawa-e-Bibisa by 11am. Earlier the Nizam Trust, Umoor e Mazhabi and city police spurned their request to stop the Matam. Even the women of the community ignored their call to gather at the Alawae Bibi while exposing their hairs in front of non Mahrams and Media Channels relaying the direct telecast all over the world. They termed their call anti-Islamic and against the teachings of Prophet MuhammadS.A.W.S and Alhlalbaitas. 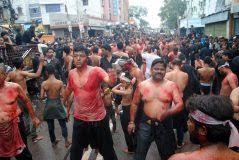 The procession which started from Alawae Bibi and passed through Shaik Faiz ki Kaman, Etebar Chowk, Kotle Alijah, Charminar, Gulzar House, Panjesha, Khadme Rasool, Mandi Mir Alam, Purani Haveli, Darulshafa, Aza khanae Zahra, Kali Khabar and culminated at Baitul Huzan near Masjid e Elahi Chaderghat at 7:30 pm. The procession covered the distance of around 6 kilometers in about 6.5 hours. This year though the procession started sharp at its defined time but concluded half an hour late. For the first time there was Shabi-e-Zuljanah in the procession throughout the route of Alam-e-Bibisa . All along the route citizens irrespective of cast creed and religion came in droves and paid their homage to the Imam Hussainas and offered dhattis and Nazar. Apart from this family members of Nizam, Hyderabad Police Commissioner, representatives of various political parties and prominent personalities offered Dhattis along the route of the Bibi Ka Alam.

According to the president Markazi Anjuman Matami Gurohan, HYD, T.S., Syed Najaf Ali Shoukat about 23 matami Anjuman’s and Grouhan offered khooni matam pursa along the route. This year a surge was seen among the youth performing Khooni matam compared to the previous years as just before Muharram certain voices were raised about Azadari and Khooni Matam. On behalf of the Shia Community, he thanked the various Government departments and specially the police department for their vital role in the elaborate arrangements and peaceful conduction of the procession. 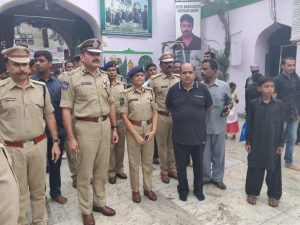 Hyderabad City Police under the direct supervision of commissioner of Police Sri Anjani Kumar, Additional commissioner SIT, Smt Shikha Goel and Additional CP, Sri D.S Chouhan did a commendable job. DCP South Zone, V. Satnarayana and new DCP Kishor Amber, assisted by DCP traffic Babu Rao, Additional DCP Ghouse Mohiudding, ACP Mirchowk B. Anand and Inspector of Police Balu Chouhan (Mirchowk) and V.Nayak of Dabeerpura,and M.A Jaweed of Rein Bazaar made elaborate security  arrangements and traffic management for the smooth conduction of the Muharram procession in which thousands of people from all walks of life irrespective of their caste, creed and religion participated and paid their homage according to their customs and traditions. Various departments like GHMC, Water Works, Electricity Department, Forest Department, R&D department played their formidable role during the 10 days of Muharram and also along the procession on the day of Ashoora. (Newslines)