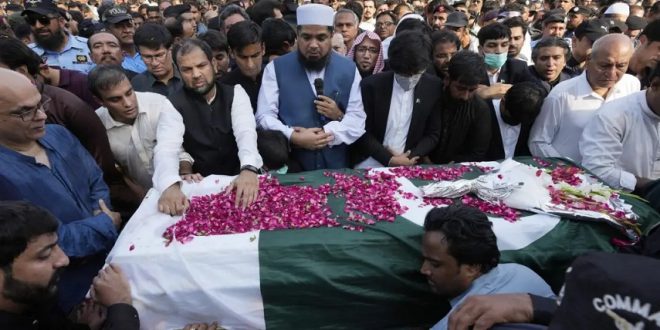 ISLAMABAD/ KARACHI: Thousands of people chanted “revolution” as journalist Arshad Sharif was buried after being shot and killed under mysterious circumstances in Kenya.

His funeral prayers were performed at Islamabad’s Faisal Mosque earlier on Thursday. Thousands of people attended, many of whom were carrying placards and flags of Pakistan and former Prime Minister Imran Kahn’s Pakistan Tehreek-e-Insaf (PTI) political party. 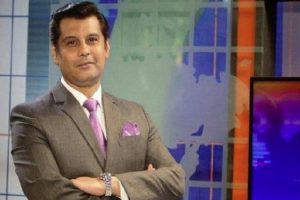 The funeral was held a day after Sharif’s remains were flown home from Kenya, where he was shot on Sunday while travelling with a companion in a vehicle on the Nairobi-Magadi highway.

Sharif was among the top news anchors in Pakistan. He had a vast following from a cross-section of society. Many gathered at the mosque to pay their final respects.

The Kenyan police have acknowledged the 49-year-old journalist was shot dead in what they called a case of “mistaken identity” and have expressed regret over the “unfortunate incident”.

A heavy police contingent was deployed at the mosque to oversee the crowd, which one Islamabad police official estimated ranged from 25,000 to 30,000 people.

Lawyer Aliya Fatima took time off work so she could pay her respects to Sharif with her mother and siblings.

“I am a regular viewer of his show, and he was among the most learned journalists we had,” she told media. “Now that he is silenced, it is our duty to stand up and speak for him.”

“Even if I did not agree with his politics or saw his show regularly, the important thing is he was a human,” he told media. “He was a Muslim. He was a father. He should not have been killed.” 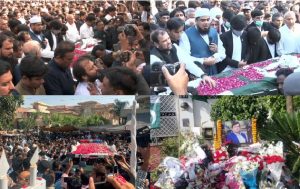 Many mourners gathered in the vast courtyard of the Faisal Mosque, one of Pakistan’s largest, and chanted slogans such as “Arshad, your blood will usher in revolution and “God is great!”

Sharif was once considered close to Pakistan’s military establishment and cricketer-turned-politician Khan.

Khan’s PTI government was removed in April in a parliamentary vote of no confidence. He blamed a “foreign conspiracy” as well as Pakistan’s military for colluding with his political rivals.

After that, Sharif became a staunch critic of the military, which has ruled the country for more than half of its 75 years as an independent nation. Critics have often called it the main powerbroker in the South Asian nation of 220 million people.

Mourner Qaiser Mustafa, 44, said he was convinced that Pakistan’s military establishment and the current government were to blame for Sharif’s death.

“He was courageous and honest and somebody who was able to speak truth to power, and they decided to silence him,” Mustafa told media.

He said Sharif had opened his eyes. 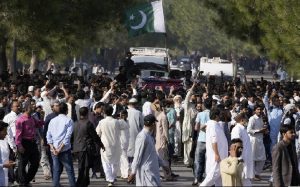 “We have a romance with the military, and people trust them,” he said, “but after April, everything changed. We realized that we are being played. We all make mistakes and learn from it, and perhaps Arshad also learned and evolved his views.”

Pakistani authorities ordered the formation of a two-member committee of inquiry that will travel to Kenya to investigate Sharif’s killing and present a report to the government.

The Pakistani military also asked the government to immediately investigate his death.

Lieutenant General Babar Iftikhar said on Thursday that people should not be pointing fingers.

“It has to be determined who exactly benefitted from his killing,” Iftikhar said. “We have to wait for the report from the inquiry commission. Until the report is released, it is not appropriate to make allegations.”

Pakistan’s Interior Minister Rana Sanaullah told reporters those responsible for the killing have yet to be identified. “Before bringing any verified facts in front, I don’t want to accuse anybody of this crime,” he said.