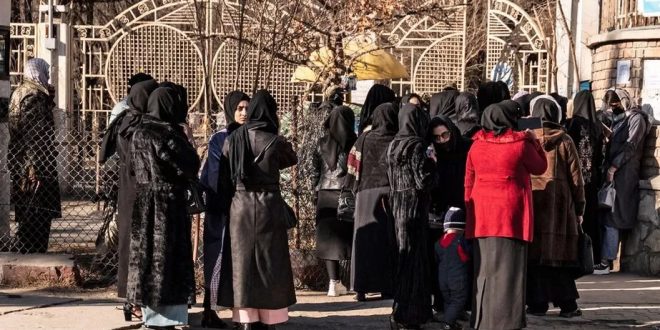 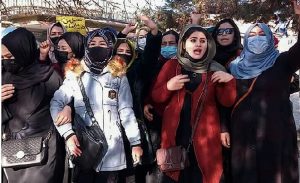 KABUL/ ISLAMABAD: The Taliban have arrested five women taking part in a protest in the Afghan capital, Kabul, against the ban on women attending universities.

Three journalists were also arrested. Protests are also understood to have taken place in the Takhar province.

Guards stopped hundreds of women from entering universities on Wednesday – a day after the ban was announced.

It is the latest policy restricting women’s education since the Taliban returned to power last year.

Girls have already been excluded from secondary schools.

The new ban was implemented with immediate effect by the higher education minister on Tuesday, with public and private universities ordered to bar women from attending.

The education ministry said its scholars had evaluated the university curriculum and environment, and attendance for girls would be suspended “until a suitable environment” was provided.

Footage shared on social media on Thursday showed around two dozen Afghan women dressed in hijabs marching through the streets of Kabul, raising banners and shouting slogans. The group had initially planned to gather in front of Kabul University, the country’s largest and most prestigious educational institution, but changed location after the authorities deployed a large number of security personnel there. 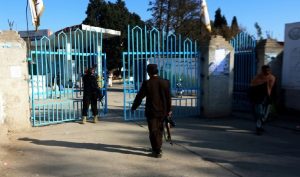 A protester at the rally said “some of the girls” had been arrested by women police officers. Two were released, but several remained in custody, she added.

Some men have responded with acts of civil disobedience in solidarity with the protesters. Around 50 male university professors at public and private institutions have resigned their positions while some male students have reportedly refused to sit their exams.

The Taliban had promised a softer rule after seizing power in August 2021 following the US withdrawal from the country. However the hardline Islamists have continued to roll back women’s rights and freedoms in the country.

Prior to Tuesday’s announcement, universities had already been operating under discriminatory rules for women.

There were gender segregated entrances and classrooms, and female students could only be taught by women professors or old men.

However, women were still getting education. 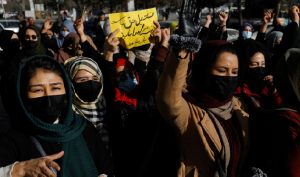 The UN’s education and culture organization, UNESCO, says that the rate of female attendance in higher education increased 20 times between 2001 – the year the Taliban were ousted by the US intervention – and 2018.

The United Nations and several countries have condemned the order, which takes Afghanistan back to the Taliban’s first period of rule when girls could not receive formal education.

The UN’s Special Rapporteur to Afghanistan said it was “a new low further violating the right to equal education and deepens the erasure of women from Afghan society.”

The US said such a move would “come with consequences for the Taliban”.

“The Taliban cannot expect to be a legitimate member of the international community until they respect the rights of all in Afghanistan,” said Secretary of State Antony Blinken in a statement.