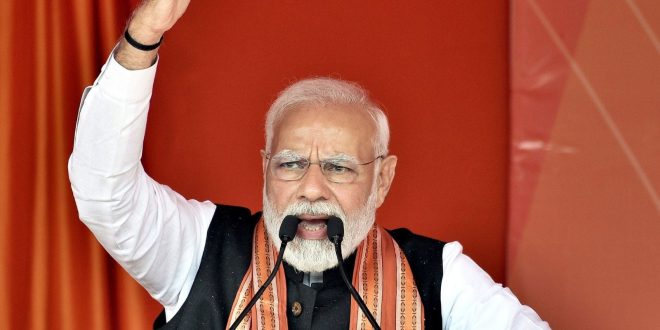 Gujrat’Nov’28’2022-Poll Campaigning has hit the top gear in poll-bound Gujarat on penultimate day of campaigning for first phase of Assembly polls on Monday.

Political leaders are making last-ditch efforts to woo the voters. Senior BJP leader and Prime Minister Narendra Modi who is on the campaign trail of Gujarat, addressed rallies at Palitana and Anjar and Jamnagar Monday. PM said it is the Unity of Gujarati people that fetched development and established peace and stability in the state over the two decades.  Mr. Modi credited Sauni Yojana for the upliftment of farmers in the region and took a dig at Congress for its anti-Kutch, anti-Narmada Yojana mindset and its divide-and-rule policy. The PM said the election will be decisive in shaping the future roadmap of the state.

Congress’s National President Mallikarjun Kharge addressed a poll rally at Mehsana on Monday and criticized BJP on several issues including rising inflation, and unemployment. He questioned BJP for not filling the vacancies in government jobs. Meanwhile, veteran BJP leader Jay Narayan Vyas who resigned from the party a few days back joined Congress on Monday. Addressing the media, Mr. Vyas said it was the Congress government that laid the foundation of the Narmada scheme in Gujarat. AAP Convener Arvind Kejriwal campaigned in Surat on Monday.

Prime Minister Narendra Modi has held election rallies at more than 20 places so far and has registered his presence in almost every part of the state. Home Minister Amit Shah also held over three dozen poll meetings in the state. Apart from these, Chief Minister Bhupendra Patel, State President CR Patil, Chief Ministers of BJP ruling states and about a dozen central ministers are continuously holding public meetings in favour of the party candidates. On the other hand, Congress President Mallikarjun Kharge held four poll meetings in two days while other party leaders are campaigning for party candidates at various places. On behalf of Aam Aadmi Party, national convener Arvind Kejriwal and Punjab Chief Minister Bhagwant Mann held rallies and road shows at about a dozen places so far.