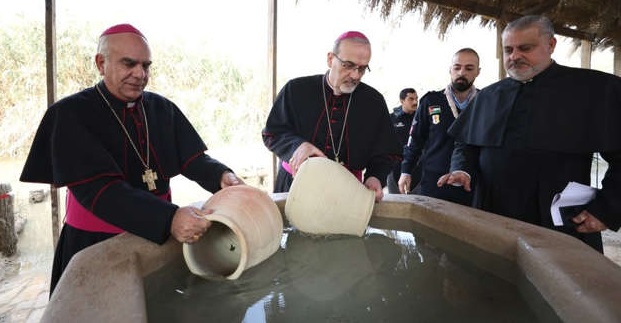 Plan for a million Christians to visit Jesus site

AMMAN: Today the River Jordan lacks its biblical proportions, but some 200,000 visitors still flock to the traditional spot for Christian baptisms in Jordan in a typical year.

I watch as groups from the US and Europe take turns to dip cautiously in the narrow breadth of muddy water and photograph themselves along the reed-lined banks. 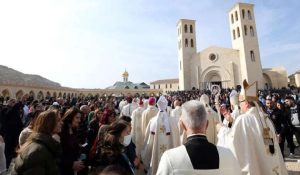 “When you’re in the area you have to visit. its part of history,” enthuses Oliver, who is French. Mark from Maryland says he came for “the spirituality, to be able to walk in the footsteps of Jesus”.

This month is peak season for pilgrims as Western – and then Eastern – Orthodox churches celebrate Epiphany. The holiday marks both the visit of the Three Wise Men, or Magi, to a new-born Jesus, and his later baptism by the prophet John.

Recently, Jordan announced an ambitious $100m (£83m) plan aimed at drawing a million Christians to al-Maghtas in 2030, to commemorate what is seen as the 2,000th anniversary of Jesus’s baptism.

It promises a biblical village and the largest Christian pilgrimage and interfaith centre in the region, recognizing that the River Jordan and its valley is also loaded with religious importance for Jews and Muslims.

“It’s always great to have our visitors, our pilgrims, experience what John and Jesus did,” says Rustom Mkhjian, director general of Jordan’s baptism site.

“I call it ‘the fifth gospel’, as you physically see what you read in all the four gospels. Truly you feel in the midst of religious history and faith.” 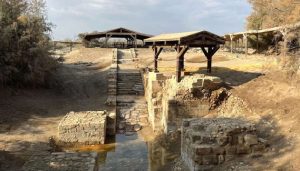 Among the many features he points out is a native plant popular with bees, called yanbout or locust pod, reminding me that the Bible describes St John dressed in his camel-hair garments, eating “locusts and wild honey”.

The baptism site, also known as Bethany Beyond the Jordan, is a Unesco World Heritage site, where the ruins of Roman and Byzantine churches, a monastery and baptism pools are preserved among the wilderness near to the lowest point on Earth.

They were uncovered in 1995 after Jordan’s peace treaty with Israel.

Prior to that, both sides of the river had been a closed military zone since the 1967 Middle East War, in which Israel captured the West Bank from Jordan and occupied it.

“The rediscovery of the site is one of the fruits of peace,” Mkhjian tells me. “Imagine, 11 huge minefields were demined. I’m talking about tens of thousands of mines were taken away. Isn’t it great to have millions of pilgrims instead of mines?”

Although the Jordanians vie with the Israeli-controlled side of the river for tourists, in the past two decades three Catholic popes, two popes from the Coptic Church and church leaders from all over the world have visited al-Maghtas. 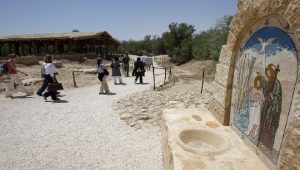 The rich and famous have had their children baptized here, and Jordan’s royal court has sent the holy waters for British royal christenings.

On the invitation of the Jordanian authorities, different Christian denominations have built new churches here, with more planned. It makes for a rare sight in the Middle East.

“We’re learning how much we all have in common, and that the Jordanian government is establishing all of this to give each and every denomination they can find the right to share in the property here.”

The masterplan for the new 340-acre baptism zone, next to the Unesco site, was unveiled last month by King Abdullah. (Int’l News Desk)