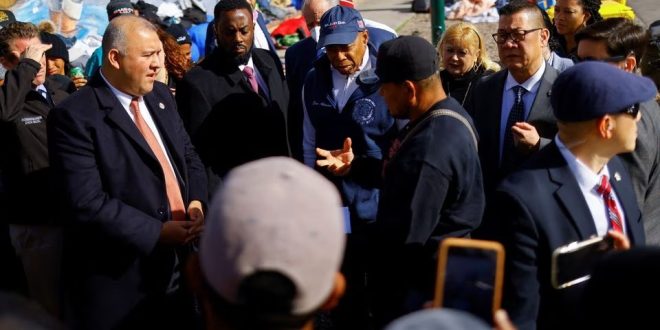 “No room” in New York for migrants: Mayor

NEW YORK/ LOS ANGELES: The mayor of New York travelled to the Mexican border city of El Paso on Sunday and declared that “there is no room in New York” for busloads of migrants being sent to America’s most populous city.

Eric Adams, a Democrat, was also critical of the administration of Democratic US President Joe Biden, saying “now is the time for the national government to do its job” about the immigrant crisis at America’s southern border. 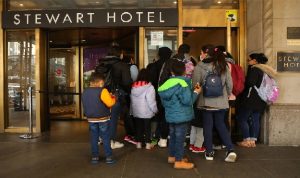 The visit of a New York mayor to a southern border city about the issue of immigrants is unprecedented.

Busloads of migrants have been shipped north to New York and other cities by Republican-run states. That has exacerbated a housing crisis in New York and a worsening homeless crisis in the city.

Adams’s trip to El Paso comes after he said the migrant influx into New York could cost the city as much as $2 billion, at a time when the city is already facing a major budget shortfall.

In recent months the Republican governors of Florida and Texas have sent thousands of migrants seeking sanctuary in the US to cities run by Democratic politicians, including New York, Chicago and Washington, DC.

Who is trying to enter the United States at the border?

US Border Patrol made more than 2.2 million arrests at the US-Mexico in the 2022 fiscal year, which ended last September, the most ever recorded but many of those were individual migrants who tried to cross multiple times after being caught and rapidly expelled back to Mexico under a COVID-era order known as Title 42.

The policy was implemented in March 2020 under Republican former president Donald Trump, an immigration hardliner. Biden, a Democrat, tried to end the Title 42 order, which health officials said was no longer needed, but the termination was blocked in court. 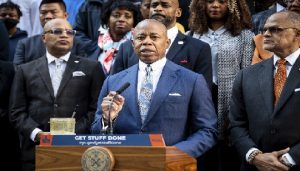 Before last year, Mexico had generally only been accepting expulsions of its own citizens along with migrants from the Central American countries of Guatemala, Honduras and El Salvador. The number of Venezuelans crossing the border plummeted after Mexico agreed to accept expulsions of Venezuelan migrants last October.

Biden announced on Thursday that Cubans, Haitians and Nicaraguans who have also been arriving in larger numbers will now also be expelled under Title 42.

Why are people crossing?

Before Title 42, migrants had been allowed to approach a US port of entry and tell border officials they feared returning to their home country, which sets in motion the asylum process.

Migrants looking for protection must prove they have been persecuted, or fear they will be, on the basis of their race, religion, nationality, political opinion or membership in a particular social group to US asylum officer or in US immigration court.

Migrants who have arrived on US soil are eligible to ask for asylum, even if they cross the border illegally and turn themselves into border agents, but winning a case is a long and complicated process that can take years due to backlogs. 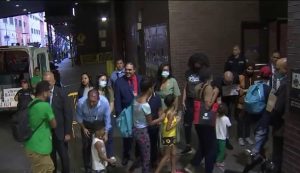 The Biden administration has said it wants to surge resources to process more claims quicker but faces budgetary and other constraints.

The administration in its announcement Thursday also said it would expand its use of an app called CBP One that allows asylum seekers to enter their information as a pre-screening step to be given an appointment at a US port.

What happens to people after they cross?

Migrants who cannot be expelled under Title 42 are processed under an immigration statute known as Title 8 and can be detained or released into the United States while their immigration cases are pending.

Asylum seekers are eligible to apply for work permits as long as they attend court hearings and other immigration check-ins. Some are obligated to comply with electronic monitoring, like ankle bracelets. If they miss their hearings or lose their cases they are at risk of deportation.

The Republican governors of Texas and Arizona last year bused thousands of migrants from the border to northern cities like New York and Washington, DC, which they say eases the pressure in border communities and sends a political message to Biden and Democrats. The city of El Paso also ran its own busing campaign but has stopped.

Why can’t more people enter legally in the US? 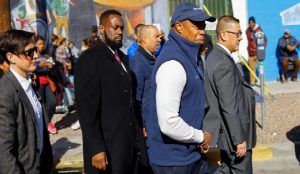 As part of Biden’s announcement on Thursday, the administration said it would admit up to 30,000 migrants by air from Cuba, Haiti, Nicaragua and Venezuela each month under a new temporary “humanitarian parole” program if they have a US sponsor.

There are a number of ways to enter the United States legally as an immigrant, including being sponsored by a US citizen or company or performing a particular job or study but obtaining a visa can be a long, expensive process that is not always accessible to the most vulnerable people.

The Biden administration also set a goal of resettling 125,000 refugees 2022 who apply from abroad after Trump dramatically slashed admissions during his term but delays from the COVID-pandemic have contributed to the US falling way behind on that goal.

When Biden took office in 2021, he said he wanted Congress to pass comprehensive immigration reform. Such efforts to fix what many believe is a broken immigration system has been a long-standing goal of multiple administrations, but lawmakers have failed to come to any kind of consensus in recent years. (Int’l News Desk)