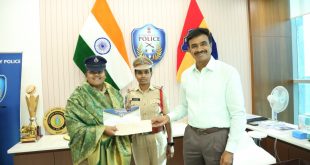 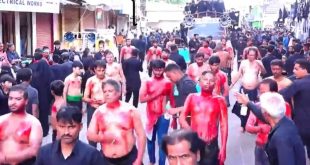 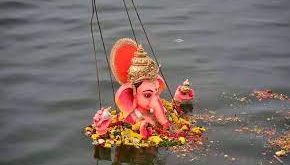 Several religious programmes were organized across the city to commemorate the martyrdom of Imam Hussain, the grandson of Prophet Mohammed, in the battle of Karbala centuries ago. Feeding camps were organized while many distributed milk sherbet and soft drinks to the public.

The highlight of the day was the Bibi ka Alam procession taken out on a caparisoned elephant in a procession in the old city. It was preceded by a mounted police party and camels that carried small Alams and relics.

Members of the Shia community marched along with the procession flagellating themselves with sharp weapons to the cries of ‘Ya Husain’ to mourn the martyrdom of Imam Husain, even as women who lined up on the procession route beat their chest as the procession passed through the road.

The Alam (standard) was carried on an elephant Madhuri, brought for the procession from Kolhapur. The Bibi ka Alam was taken out from the Bibi ka Alawa around 1.30 pm, winding through the old city before culminating at Masjid-e-Ilahi Chaderghat.

The practice of installing the Bibi ka Alam dates back to the Qutb Shahi period when Hayath Bakshi Begum, the wife of Muhammad Qutb Shah, installed an alam in the memory of Bibi Fatima at Golconda. Later, during the Asaf Jahi era, the alam was moved over to Bibi ka Alawa at Dabeerpura specially built for the purpose.

The alam contains a piece of the wooden plank on which Bibi Fatima was given her final ablution before burial. The relic is said to have reached Golconda all the way from Karbala in Iraq during the reign of Golconda king Abdullah Qutb Shah, according to historians.

People from different communities lined up along the route and offered ‘dhattis’ to the Alam. About 800 ‘Alams’ from different areas were taken out and merged into the main procession. State Ministers, City Police Commissioner CV Anand and GHMC officials offered dhatti to the Bibi ka Alam at different places. Members of the Nizam’s family too offered ‘dhattis’ at Azakhan-e-Zehra and Purani Haveli. 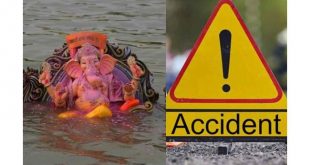