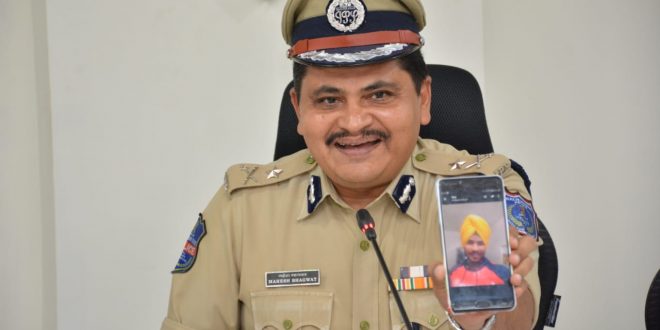 Hyderabad, April 3 (PMI): A boy, Dinesh Jena, who left home in Navodaya Nagar in Moulali on January 21, 2011 and found missing since then, was traced in Ranakala village in Amritsar district of Punjab State.
On receipt of a complaint from Susanna, wife of ABS Salam that her son eight-year-old Dinesh Jena was missing since January 21, the Kushaiguda of police registered a boy missing case in 2011 and took up investigation and despite their best efforts, the cops could not trace the boy.
Meanwhile, the complainant came across the missing boy on facebook in August last year with profile “Dinesh  Jena Lima” and alerted the Cyber Crimes Police. It was revealed the boy changed his profile as “Dinesh Jena” and continuing there. The police found his latest photo uploaded on Facebook and when showed his mother identified him. The sleuths collected IP address and traced the location of the missing boy in Ranakala village in Amritsar district.
A police team went to Punjab and traced the boy Dinesh Jena, who said he was 21 years old now. On further questioning, the boy revealed he was 13 years and not eight years when he left home. The boy was under the guardianship of a landlord Sukhraj Singh of Ranakala village. He was brought back and when introduced to his parents they were excited and very happy over seeing their son.
The case was investigated by D. Jalender Reddy, Inspector, Cyber Crimes, Rachakonda, under the guidance of S. Harinath, Asst. Commissioner of Police, and K.R. Nagaraju, Dy. Commissioner of Police, Crimes, Rachakonda. Commissioner Mahesh M. Bhagwat, IPS, appreciated the efforts of the investigating team in tracing the boy after eight years. (press media of india)