Siddipet:April 10- The graduation ceremony will be held at Chintamadaka in Siddipet district, the hometown of CM KCR. Sri Rama Navami started a week earlier in the commotion. The prestige ceremony of the Pattabhiramu temple and the establishment of the kalash were traditionally held in the presence of Vedic scholars.
On Sunday, Medical and Health Minister Harish Rao performed special pujas at the idol prestige festival, Shikhara Samprokshan and Kalyanotsavam in honor of Sri Rama Navami. The minister was greeted by women Mangalaharathu and saffron tilak, while the villagers were cordially invited to the atmosphere with the spirituality of Sri Rama bhajans 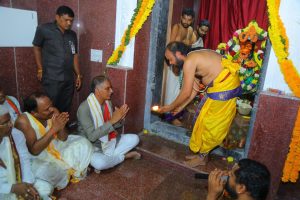 To this end, on the occasion of the marriage ceremony of Pattabhirams, silk cloths were placed around the temple and presented to Lord Sitarama. Afterwards, the Minister said .. Sri Rama Navami wished all the people of the village. The CM said that the temple was built under the leadership of KCR in the most beautiful manner. With the blessings of Lord Rama, the work of Kaleswaram, which could not have happened even in a dream, was done with the efforts of CM KCR and the village was flooded with ponds, canals and water artefacts, he said. Mandu explained that the waters of the Godavari were flowing in the tundra and the pond was filled with reeds and reminded of the old days.

With the blessings of CM KCR, he said that the development of Chintamadaka village is going on without any worries. The villagers said it was their good fortune that the monolithic idol of Lord Rama and his family was in disarray in the state. He said that the foundation stone was laid for the restoration work of the Shiva temple at a cost of Rs 3 crore. The villagers were asked to see to it that regular poojas were held in the temple. Village Sarpanch Hansaketan Reddy traditionally honored the minister to this extent. The event was attended by Suda Chairman Ravinder Reddy, other public representatives and others.