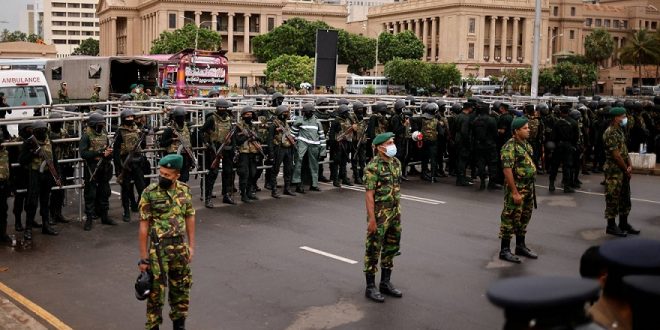 COLOMBO: The military in Sri Lanka has taken control of the presidential secretariat in Colombo, after what members of the country’s months-long protest movement described as a “brutal assault”.

Soldiers overnight also destroyed tents at the adjacent GotaGoGama protest site, arrested several protest leaders and cordoned off the area together with about 100 protesters. 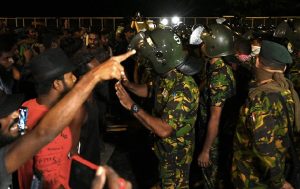 The military assault came hours after the protesters on Thursday withdrew from the camp in front of Temple Trees, the prime minister’s official residence. The demonstrators had already announced their intention to withdraw from the presidential secretariat on July 22.

“By around midnight, we heard that a huge contingent of military was on their way towards GotaGoGama and suddenly we saw them running into the presidential secretariat,” Nipun Charaka Jayasekara, a young protester, told media.

“Soon after, they cordoned off the area and brutally assaulted the peaceful protesters as if we were thugs.”

He sustained minor injuries, he said, while trying to run away from the military crackdown.

As the military attack began, Jayasekara streamed it live but later lost his phone in the chaos.

“Some were very badly assaulted; inhumanely assaulted as if they have no heart. We have nowhere to go now. We are locked in GotaGoGama. I have nothing now; not even my phone. I’m now using an old phone now. I am left with only my clothes,” he said. 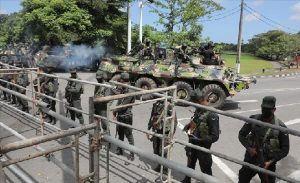 It is estimated that about 10 protesters were badly injured after being attacked.

​​​​​The assault on the protest sites came after Ranil Wickremesinghe, a six-time prime minister, took the oath as the country’s new president. His predecessor, Gotabaya Rajapaksa, had fled the country after weeks of protests triggered by the country’s economic collapse and growing public anger over the Rajapaksas longtime political influence.

​The Sri Lanka Bar Association said it had been made aware of the raids and that there had been arrests.

“The authorities must ensure the safety of everyone and their whereabouts must be made known,” the association’s president Saliya Peiris said in a statement. “I have tried to contact the IGP (Inspector General of Police) and also messaged the Army Commander. Unnecessary use of brute force will not help this country and its international image.”

Sara Hulton, the British high commissioner to Sri Lanka, said she was “very concerned” about the reports of the raids. “We have made clear the importance of the right to peaceful protest,” she wrote on Twitter. 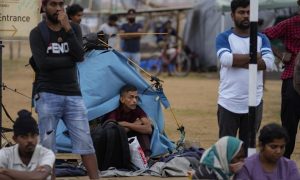 “Deeply concerned about actions taken against protestors at Galle Face in the middle of the night. We urge restraint by authorities & immediate access to medical attention for those injured,” Julie Chung, the United States ambassador to Sri Lanka, said.

“There was no warning at all. The military suddenly came in and chased us away assaulting us and shouting with filthy language,” he said. “There may be 200 protesters but the whole area looks like a sea of soldiers.”​​

Shabeer Mohamed, a young protest leader, said he was assaulted by an air force officer while reporting the raid live through social media.

“He came from behind and assaulted me on the head and threw away my mobile phone while I was live streaming. Several other people were also assaulted when they were doing live broadcasts,” Shabeer Mohamed told Al Jazeera.

“They have sealed off GotaGoGama and no journalist is allowed in.” (Int’l Monitoring Desk)