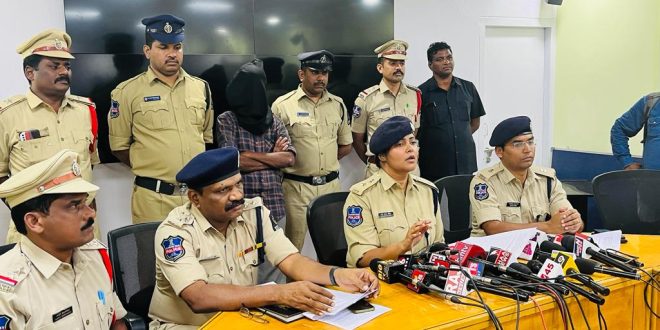 The sleuths of Mahankali PS busted kidnapping case and arrested the kidnapper. On 23.12.22, the kidnapper Naroju Ramachary Age: 34 yrs, Caste: BC (Goldsmith), Occ: Daily Wage Worker r/o Footpath of Secunderabad Railway Station N/o Dhoolumitta (V), Maddur (M), Siddipet District while the kidnaper doing labour work at Sri Vijaya Vaishnavi Mess, Old Boiguda, near Pathan Mosque, Secunderabad seen that the victim girl wearing gold ornaments who came to her grandmother’s house from her residence to play. Changed his mind set into kidnapping of girl for his wrongful gain. Having the devil eyes on the gold ornaments the kidnapper, kidnapped the victim girl sold out the gold ear rings and enchased. During the investigation, the police party Mahankali unearthed the hide out of the kidnaper within no time and thereby arrested him on the day. Recovered the property at his instance and remanded to judicial custody.
The police Mahankali requested the general public to keep watch their minor children’s while coming out to play and avoid valuables with them for their safety from the kidnapers.