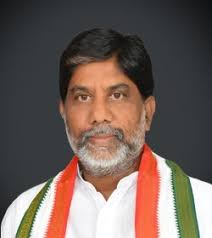 Hyderabad, Jan.24 (PMI): CLP Leader Bhatti Vikramarka on Thursday said that they firmly believe the fact that several irregularities had taken place in EVMs. He also said that the voters of the state had doubts about their cast votes. He made it clear that the doubts being raised by the voters could be easily answered by the introduction of ballot papers in the upcoming Lok Sabha elections. He made these remarks while addressing a dharna organised by the party at dharna chowk in the city.

Speaking on the occasion, he said that all the developed nations were holding elections by using the ballot papers. He demanded the election commission to respond to the allegations that the ruling BJP came into power in the 2014 elections with the help of EVM tampering. He said that it was unfortunate that such allegations were being made against an independent organisation like the EC in the country. Former DK Aruna said that the ruling party leaders had announced the names of probable winners and losers in the elections six months before the actual elections. Noting that cm KCR had met with the officials of the election commission before and after the assembly elections , she demanded the cm to reveal the reasons behind his meeting. She said that they had objections over the removal of the names of the eligible voters in the state. She mocked the statement of chief electoral officer Rajat Kumar who Apologized for the loss of the voting rights of 22 lakh voters.

CPI State Secretary Chada Venkat Reddy alleged that there was complete negligence in the voter enrolment drive held in the state. He also alleged that both cm KCR and PM Modi were ruling the state And the country like fascists. He gave a call for a nation wide agitation on the EVMs.