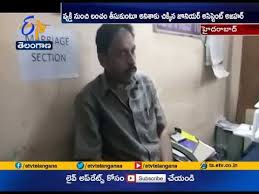 Hyderabad, Jan.24 (PMI): Mohammed Azhar, a junior assistant at the sub-registrar office in Azampura in  Malakpet, was caught red-handed by the ACB sleuths on Thursday at his office when he demanded and accepted a bribe of Rs 700 from a complainant Mohammed Farooq Mohiuddin from Charminar.

ACB officials said Azhar had demanded bribe from Mohiuddin for handing over certified copies of property documents from the sub-registrar office. He was in the habit of demanding bribe from applicants, a press release here said, adding the junior assistant was arrested and produced before the Special Court for SPE & ACB Cases after which he was remanded to judicial custody. (PMI)