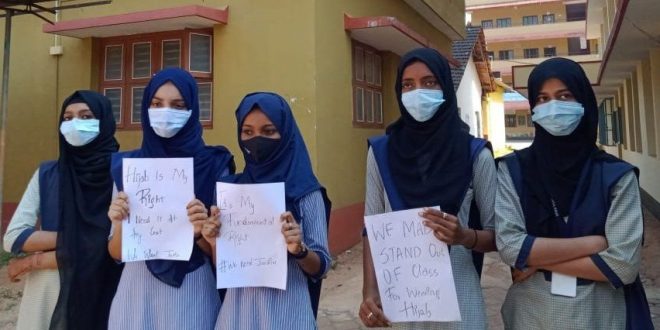 UDUPI/ NEW DELHI: A debate over the hijab, a headscarf worn by Muslim women has caused a stand-off at a women’s college in the southern Indian state of Karnataka.

Six teenage students at a government-run pre-university college, equivalent to a high school have alleged that they have been barred from classes for weeks because they insist on wearing a hijab. 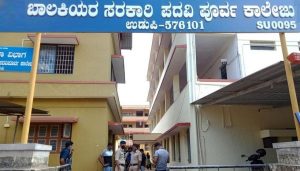 The college says it has only asked the students to remove the hijab inside the classroom they can still wear it around the campus. The six girls wear the college uniform, a loose tunic with pants and a shawl but say they should also be allowed to cover their hair.

“We have a few male teachers. We need to cover our hair before men. That is why we wear a hijab,” Almas AH, one of the students, told BBC Hindi.

It’s not unusual to see women wearing hijabs and burkas – which cover the face and body, in India, where public displays of faith are commonplace but an increasingly polarized atmosphere in recent years has led to minorities Muslims and Christians – feeling threatened and this particular row is unfolding in Udupi, one of three districts in Karnataka’s communally sensitive coastal belt. Commentators often describe the region, a stronghold of Prime Minister Narendra Modi’s right-wing BJP as a laboratory for majoritarian Hindu politics. The BJP is also in power in Karnataka.

Repeated instances of vigilantism and hate speech against Muslims in the area have deepened religious faultlines and led to the rise of vocal minority-led groups that assert their right to religious freedom. 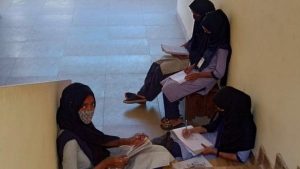 In this case, for instance, the college said the issue is further complicated by the involvement of Campus Front of India (CFI), the student wing of the radical Islamic group, Popular Front of India. Almas said she was not a member of CFI but contacted the organization when the college stopped them from attending classes.

“I have called for a report on the issue,” Karnataka state education minister BC Nagesh said. “It’s basically politics. All this is happening because elections are due next year,” Nagesh added, referring to attempts by the Popular Front of India’s political wing to gain traction in the coastal belt.

Almas said when they tried to wear the hijab in their first year at the college, they were told that their parents had signed a form that prevented them from doing so.

The pandemic then kept students away from college for months – during this time, said Almas, they realized that the form only mentioned a compulsory uniform and said nothing about a hijab.

At the end of December, when they returned to college wearing headscarves, they were not allowed to enter the classroom, she said. 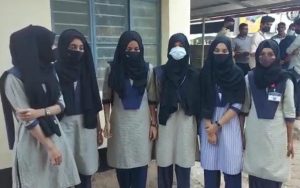 College principal Rudre Gowda alleged that the six women were deliberately creating problems and that the rest of the Muslim students, around 70, had no objections to the rule.

He said that initially, around a dozen women wanted to wear the hijab, but the number reduced after he spoke to their parents.

“All we are saying is that when their classes begin, they should remove the hijab,” he said.

He added that it was necessary for the teacher to see the student’s face, and that the uniform helped them ensure there was no discrimination among students.

“There is no rule in any book or document that the hijab is banned. We have only been told that if it is permitted, others will demand to wear saffron shawls,” said Masood Manna, a CFI leader.

Manna was referring to a recent incident in another Karnataka district where a government college banned both saffron scarves, the colour is seen as a Hindu symbol and hijabs on campus. Muslim women are allowed to cover their heads with scarves but not to fasten it with pins.

A 2018 judgment by a court in neighboring Kerala state upheld the rights of an educational institution over that of an individual in a case filed by two Muslim school students. Their school 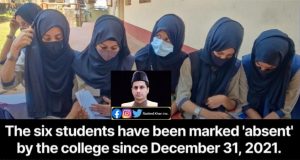 had rejected a request for them to wear a headscarf and a long-sleeved shirt.

Justice A Muhamed Mustaque had ruled that the essence of liberty meant that an individual’s interest must yield to the larger interest.

“If the management is not given (a) free hand to administer and manage the institution that would denude their fundamental right,” he wrote but senior advocate Kaleeswaram Raj told BBC Hindi that the judgment treated the rights of the students and the management as competing against each other, which wasn’t correct.

“Either you have a right or you don’t have a right. It is something that the Constitution protects going by the spirit of Article 25 (which guarantees religious freedom),” he said.

Raj said that it was reasonable for a teacher to want to observe a student’s facial expression to gauge whether they were following the lessons “but the management cannot insist that it won’t allow students to cover their hair to maintain uniformity. This is not permitted by the Constitution. 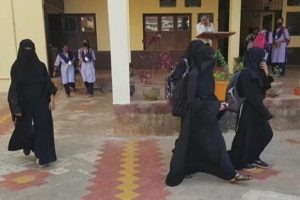 This issue will likely be resolved in a court of law” he added.

Several meetings between college officials, government representatives and the protesting students have failed to resolve the issue.

Gowda meanwhile has alleged that the girls are using social media to gain sympathy he said they often arrive at college after the gates have closed and take photos of themselves, some of which have gone viral.

Almas denied this, and said that a recent viral photo of them sitting on the college stairs was taken to counter a news report that said they were being permitted to attend classes.

“We all go to college every day despite not being allowed inside the class so that later we are not told we don’t have adequate attendance (to sit for exams).”

Post Views: 251
Share
Previous US opposes plans to strengthen WHO
Next Taliban murder 396,193 Shia in Afghanistan & 750,426 in Pakistan