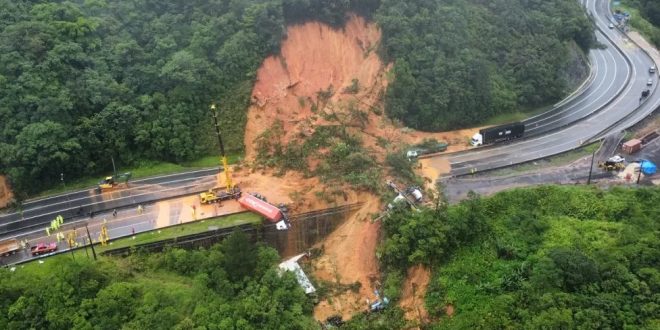 BRASILIA: A landslide on a motorway in southern Brazil has killed at least two people and left dozens missing.

A torrent of mud fell on to the BR-376 highway in the state of Parana, hitting more than 21 vehicles, authorities said.

Rescue workers at the scene said bad weather and the remote location were complicating the search effort. 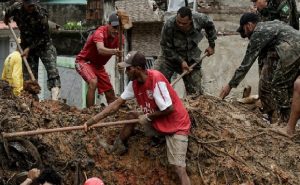 Firefighters are using a thermal camera to locate possible survivors. Up to 30 people are thought to still be missing.

Aerial footage shows one lorry precariously hanging over the side of a bridge. Rescue workers found the body of its driver, who was identified as 62-year-old Joao Pires.

A relative said he had worked as a lorry driver for most of his life and was well acquainted with the road where the accident happened.

The name of the second victim has not yet been released.

Another lorry driver whose cab was buried in the mud was rescued with only minor injuries. Jose Altair Biscaia, 43, recorded a video of himself on his phone as he was trapped.

“I’m alive, thank God. I’m in the middle of the mud, just in a little corner which is left of the lorry. I’m full of cuts but I’m alive,” he can be heard saying in the footage.

The inside of his cab looks mangled and there are blood stains. Outside the window there appears to be a wall of solid mud.

So far, six survivors have been located. Among them is the mayor of the coastal town of Guaratuba, Roberto Justus. 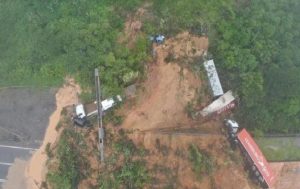 In a video uploaded to social media after his rescue, Justus said it was “a miracle” he was alive.

“It was horrible,” he said. “The mountain just fell on top of us. It swept away every last car.”

He told local radio station Radio Gaucha that he and his driver, Claudio Margarida, had broken the windows of their car to get out.

“A sea of mud, trees, and branches hit the door of the car. I was on the passenger seat and the impact was such that our car was lifted. The mud kept coming and coming and lifting us until we were on top of the vehicles on the opposite carriageway,” he recalled.

The mudslide was triggered by days of heavy rain in Parana.

Landslides are not uncommon in Brazil and hillside communities are often swept away when sodden mountainsides collapse.

In February, more than 200 people were killed in landslides in the town of Petropolis in Rio state. 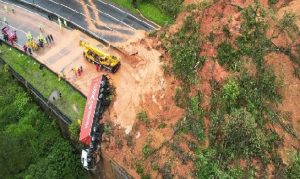 A rescue team, including 54 firefighters and specialists, is using drones with heat-detecting cameras in their search for survivors. The responders said continuous bad weather and remote location are making their search effort difficult.

“It’s hard to know the exact number of victims. A vehicle could have one to five people inside. We’re working with an estimate of 30 to 50 people missing,” local emergency response chief Manoel Vasco said.

“Fifty-four firefighters have been working non-stop for more than 35 hours,” the Parana state security authority said in a statement on Wednesday while also expressing his concerns regarding further landslides.

The occurrence of deadly landslides is quite frequent in Brazil.

“The teams are working around the clock,” Vasco said on Wednesday. “The situation in the area, which is already at risk, is likely to worsen in the coming days if it continues like this.” (Int’l Monitoring Desk)