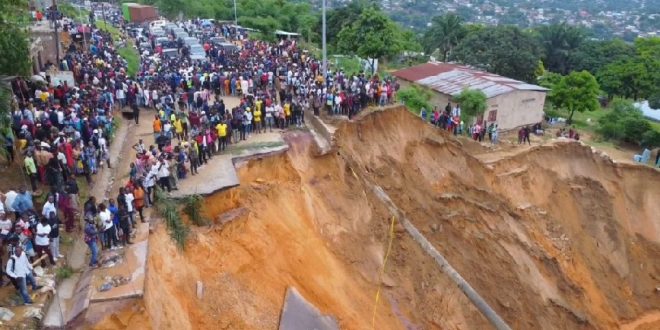 KINSHASA: More than 120 people have been killed following the worst floods in years in the capital of the Democratic Republic of Congo, Kinshasa, the authorities say. 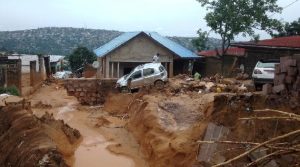 Major roads in the city centre were submerged as heavy rains continued for hours and several homes collapsed.

Many of those who died were in hillside areas which suffered landslides on Tuesday.

The government has announced a three-day period of national mourning.

Entire neighbourhoods were flooded with muddy water, and houses and roads ripped apart by sinkholes, including the N1 highway that connects the capital to the country’s main port of Matadi.

Kenga Mwamba told media that his house had collapsed, trapping his family inside.

“There was no way of getting inside my house. I was only able to rescue one child. I saw my wife’s body floating in the house. I saw my other three kids under the rubble, they were already dead. Neighbours came to help remove the bodies after the rain stopped.”

A journalist saw the bodies of nine members of a single family who were killed when their home collapsed. 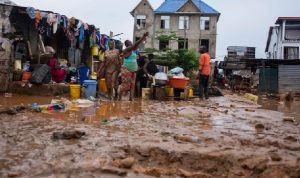 “We’ve never seen a flood here on this scale,” said Blanchard Mvubu, who lives in one of the worst affected areas.

“I was asleep and I could feel water in the house. It’s a disaster – we’ve lost all our possessions in the house, nothing could be saved.”

Prime Minister Jean-Michel Sama Lukonde led a government delegation through parts of Kinshasa to assess the damage on Tuesday.

He said officials were still searching for more bodies.

Earlier on Tuesday, the president of the Democratic Republic of Congo joined the United States in blaming climate change for the major flooding.

“The DRC is under pressure but unfortunately it’s not sufficiently heard or supported,” President Félix Tshisekedi told Secretary of State Antony Blinken as they met at a US-Africa summit in Washington.

The flooding was an example of “what we have been deploring for some time,” he said, adding that those countries which were responsible for pollution should do more to help those which are suffering.

His spokesperson said the president might cut short his trip to the US because of the disaster. 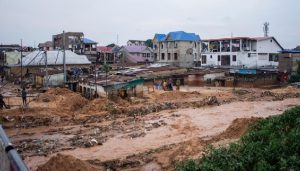 Kinshasa is located on the River Congo and has seen a huge population influx in recent years, with 15 million people now living there.

Many dwellings are shanty houses built on flood-prone slopes, and the city suffers from inadequate drainage and sewerage.

“One of the main reasons why this is happening is because of the poor housing, and poor planning,” Longombo Dieudonné from the Red Cross rescue team told the BBC.

“When it rains, there is no path for water to flow because people have blocked drainage paths with their houses, and water will find any path to move.”

A weather presenter Stav Danaos said: “Although the information from the area is limited because of lack of weather stations, we think in excess of 6in/150mm of rain fell around the capital on Monday night/early Tuesday.

“It’s also hard to be certain of the forecast for the next few days but there is the potential for further showers and storms around, perhaps lasting in to the weekend, but not as intense as we (have) already seen.”

In November 2019, about 40 people in Kinshasa died in floods and landslides. (Int’l Monitoring Desk)