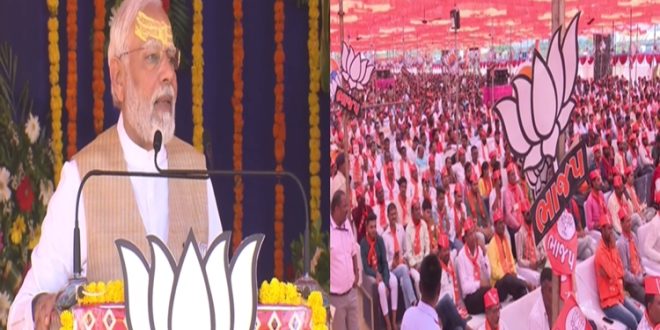 Prime Minister Narendra Modi said that a double-engine government is necessary to decide the golden future of the country for the next 25 years. Mr  Modi was addressing an election rally in Veraval today. He said his government has worked to empower citizens, farmers, youths, women, and fishermen, and brought policies to empower them. Prime minister highlighted various welfare schemes of the government like free LPG connection, toilet facilities, Ghar Ghar Nal Se Jal and Ayushman Bharat.

Mr Modi said that BJP has always worked for the development of the country and the common people. Mentioning Gujarat’s successes in areas ranging from tourism to startups, the Prime Minister called upon citizens to teach a lesson to those political parties, that defame Gujarat.

Later in the afternoon, Mr. Modi addressed a public meeting at Dhoraji in Rajkot.

Addressing a rally at Dhoraji in Rajkot district, PM said Gujarat is booming in all sectors today, and the time has come to take a leap forward to make the state prosperous in the coming 25 years. Mr. Modi said the Saurashtra region was facing a severe water crisis two decades ago, but thanks to the series of efforts by the BJP government, the waters of the Narmada river reached Saurashtra which ended the water scarcity in the region. PM underlined the role of the Sujalam Sufalam Scheme in the prosperity of Saurashtra. PM said right from the availability of water, electricity, education, health, and infrastructure, the BJP government has ensured the development of the region. PM urged people to choose development and vote for BJP to take the state to new heights of development in the coming 25 years.

Share
Previous Hyderabad: Police to go tough on wrong side driving
Next Hosts Qatar overwhelmed by Ecuador in opening match