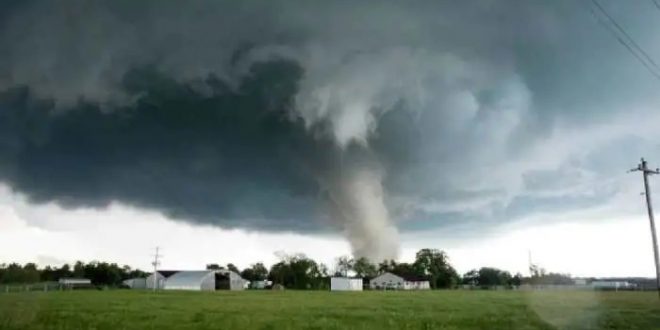 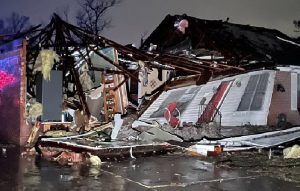 Describing the tornadoes as likely “one of the largest” storm outbreaks in history, Biden on Saturday approved an emergency disaster declaration for the worst-hit state of Kentucky, where at least 22 people have been confirmed dead.

“It’s a tragedy,” said a shaken Biden. “And we still don’t know how many lives are lost and the full extent of the damage.”

The powerful twisters, which weather forecasters say are unusual in cooler months, destroyed a candle factory in Mayfield, Kentucky, ripped through a nursing home in neighboring Arkansas, and killed at least six workers at an Amazon warehouse in Illinois.

Kentucky Governor Andy Beshear said the collection of tornadoes was the most destructive in the state’s history. He said about 40 workers had been rescued at the candle factory, which had about 110 people inside when it was reduced to a pile of rubble. 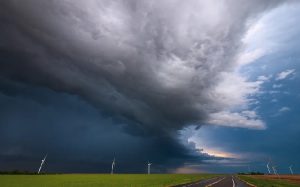 It would be a “miracle” to find anyone else alive under the debris, Beshear said.

“The devastation is unlike anything I have seen in my life and I have trouble putting it into words,” Beshear said at a press conference. “It’s very likely going to be over 100 people lost here in Kentucky.”

Mayfield Fire Chief Jeremy Creason, whose own station was destroyed, said the candle factory was diminished to a “pile of bent metal and steel and machinery” and that responders had to at times “crawl over casualties to get to live victims”.

One worker had taken to Facebook to plead for help.

“We are trapped, please, y’all, get us some help,” the woman says, her voice quavering, as a co- 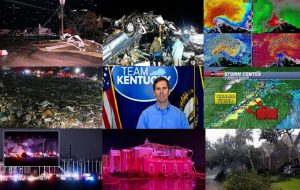 worker can be heard moaning in the background. “We are at the candle factory in Mayfield. … Please, y’all. Pray for us.”

The woman, Kyanna Parsons-Perez, was trapped under five feet (about 1.5 metres) of debris for at least two hours until rescuers managed to free her.

In an interview with NBC’s Today show, she said it was “absolutely the most terrifying” event she had ever experienced. “I did not think I was going to make it at all.”

Those reported missing at the candle factory included Janine Denise Johnson Williams, a 50-year-old mother of four whose family members kept vigil at the site Saturday.

“It’s Christmas time and she works at a place that’s making candles for gifts,” her brother Darryl Williams said. “To give up the gift of life to make a gift. We haven’t heard anything, and I’m not presuming anything. But I’m expecting for the worst.”

The tornado outbreak was triggered by a series of overnight thunderstorms, including a supercell storm that formed in northeast Arkansas. That storm moved from Arkansas and Missouri and into Tennessee and Kentucky. 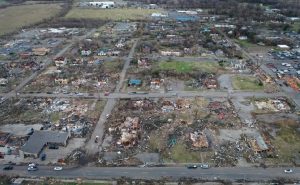 Unusually high temperatures and humidity created the environment for such an extreme weather event at this time of year, said Victor Gensini, a professor in geographic and atmospheric sciences at Northern Illinois University.

“This is an historic, if not generational event,” Gensini said.

If early reports are confirmed, the twister may have touched down for nearly 250 miles (400km), he said, a path length longer than the longest tornado on record, which tracked for about 220 miles (355 km) through Missouri, Illinois and Indiana in March 1925.

Biden told reporters that he would be asking the Environmental Protection Agency to examine what role climate change may have played in fuelling the storms, and he raised questions about the tornado warning systems.

“What warning was there? And was it strong enough and was it heeded?” Biden said. 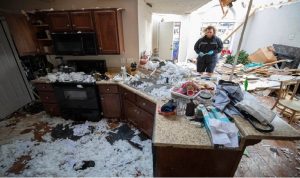 In Edwardsville, Illinois, Fire Chief James Whiteford said at least six people were killed when an Amazon warehouse collapsed. Some 45 people survived but Whiteford said authorities were uncertain whether anyone was still unaccounted for because workers were in the midst of a shift change when it was struck by the tornado on Friday.

“This is a devastating tragedy for our Amazon family and our focus is on supporting our employees and partners,” Amazon spokesperson Richard Rocha said in a written statement.

The Retail, Wholesale and Department Store Union, which has been trying to organize workers at an Amazon facility in Alabama, criticized the company for keeping the Illinois site open during a weather emergency.

In Monette, Arkansas, one person was killed and five seriously injured when a tornado tore through a nursing home with 90 beds.

“The walls and roofs were ripped off,” NBC Correspondent Jay Gray told Al Jazeera. “The entire 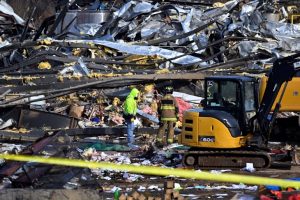 back half of this facility is gone, all that is left is crumbled brick, twisted metal, shattered glass. This type of loss is playing out in communities across six states at this point.”

Reporting from the scene of the disaster, Gray said most people were still in shock.

“What I am hearing from survivors is stunned disbelief,” he said. “It’s unseasonable. This is not a time of year that we see tornadoes.

The death toll also included four people in Tennessee and two in Missouri. 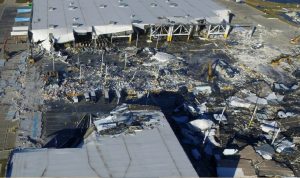 As of Saturday afternoon, nearly 99,000 customers in Kentucky and more than 71,000 in Tennessee were without power, according to PowerOutage.US, a website tracking power outages.

Kentucky officials called on residents to stay off the roads and to donate blood, as responders rushed to rescue survivors and account for people in communities that had lost communications.

“We’ve got Guardsmen who are out doing door knocks and checking up on folks because there’s no other communication with some of these people,” said Brigadier General Haldane Lamberton of the Kentucky National Guard. (Int’l Monitoring Desk)