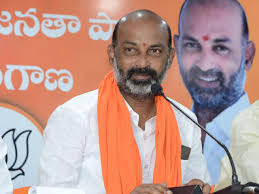 He demanded the  State government to spell out its stand on podu lands of the tribals of the state .He made these remarks while addressing a gathering at the party headquarters on the occasion of Sevalal Maharaj birth anniversary celebrations.

Speaking on the occasion he said that Sevalal had brought all migrant communities on one platform. He said that it was a matter of pride that Sevalal was born on Telugu soil. Commenting on the Gurrapubodu Thanda land issue, he claimed that the state government was trying to take away the government lands even after the orders of the high Court of the state .

He said that the tribals of the state were coming on one platform for the upcoming by-elections. He alleged that the Chief Minister of the state KCR was not giving funds  to the tribal thandas even after turning them into village Panchayats.(PMI)