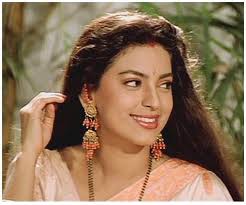 Hyderabad,  I have a special place in my heart for Hyderabad.  I have been coming here, to this city, for shooting for many years. I love the city and its people.  I owe my success to south said Juhi Chawla, Actress, Environmentalist while addressing a press conference here in the city at Hotel Park Hyatt, just before addressing the Young FICCI Ladies Organisation(YFLO) members.
She addressed the press conference along with Sandhya Raju, Chairperson of YFLO and Shilpareddy.
“I love to work in the Telugu film industry if there are any offers.  But, as of now I don’t have any offers, she informed.  I have learnt discipline from Telugu industry.
When asked if she would allow her kids to get into Bollywood, she said, they are in school now and too early to say anything. But, I am not averse to the idea of getting them into film industry she added.
Replying to another question she said, “women came powered from heaven into this world”. Women are multi-tasking, she said.
When asked to comment whether building film career in her days was easy or today where everything is scripted, Juhi replied that, it is true today everything is scripted and comes in a platter.  Today’s actresses are much more groomed than us. They are much more exposed to cinema than us.  But, they have that much pressure to gain firm foothold and survive the competition. Eventhough everything is scripted for them now, it is not easy to make a mark. Though they may be body perfect, hair perfect, they still need to work hard, she said.
Today’s women are entering into many areas in the film industry which, once upon a time were male dominated, she added.  I am trying to produce a film. I got an opportunity to get some lovely script. It may be a Marathi film she informed.
After the press conference, Juhi addressed the 200 plus YFLO members.
When you want something to be said, tell the man.  When you want something to be done, tell the woman, she started her conversation with the statement.  The interactive session was moderated by Shilpa Reddy, who asked her many questions some of them include, how does her normal day of life go?, how has been her crusade against mobile radiation, awareness drive against use of plastics etc.
For the last couple of years, Juhi Chawla has been on a mission to educate users on the perils of mobile phone radiation, a ticking health time-bomb. The former Miss India, Juhi Chawla expressed concern over impacts of radiation . The Bollywood actor demonstrated in the hall with the help of her assistant the harmful effects of radiation.  Juhi shared her journey, cellphone and effect on the blood etc. Technology is galloping, but we don’t know the dark side of it, she said and added that wired phones are better than wireless mobiles. Old is gold, she informed.
In the year 2017, Supreme Court ruled out to take back plastics.  The next generation will be threatened more seriously than the atom bomb, she informed. Every piece of plastic ever made is still here and hasn’t been biodegraded. It is not biodegradable.  We have been producing plastics. Where is it going after we have used it. It is going into lakes, seas, oceans, landfills and stomachs of animals. Juhi had screened couple of films to illustrate her point that how plastics is killing animals.
One million plastic bags are used every minute, she informed.
Do not drink water from plastic bottles.  It is cancerous.  It is proved by Baba Atomic Research Center (BARC) she informed.  She also explained how to minimize using plastics.  She asked to make small changes.
I live by Yoga.  Without Yoga I will be torn into pieces,  Juhi Chawla told. She informed that she was going to Bangalore tomorrow for the IPL Auction.