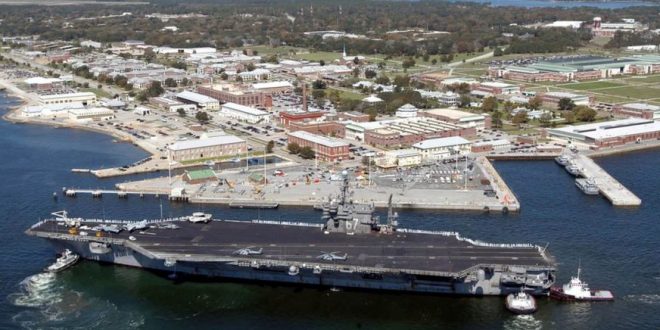 Saudi student kills three at US naval base

PENSACOLA/ RIYADH: The gunman who killed three people at a US naval base in Pensacola, Florida, was a Saudi student, officials say.

He has been named as Mohammed Saeed Alshamrani – a Saudi military member in training at the site. He was shot dead by officials.

The local sheriff’s office confirmed eight others were injured in the attack including two officers. The shooter used a handgun.

It is the second shooting to take place at a US military base this week.

A US sailor shot two workers at the Pearl Harbor Military Base in Hawaii on Wednesday.

Authorities were alerted to the shooting at the base on the waterfront southwest of Pensacola at 06:51 (12:51 GMT).

“Walking through the crime scene was like being on the set of a movie,” said Escambia County Sheriff David Morgan.

Two officers were shot in the limbs but are expected to recover.

According to its website the naval airbase, which is still in lockdown, employs more than 16,000 military and 7,400 civilian personnel.

“There’s obviously going to be a lot of questions about this individual being a foreign national, being a part of the Saudi air force and then to be here training on our soil,” said the governor of Florida, Ron DeSantis.

“Obviously the government of Saudi Arabia needs to make things better for these victims and I think they’re going to owe a debt here, given that this was one of their individuals,” he added.

President Donald Trump said that King Salman of Saudi Arabia had called to “express his sincere condolences and give his sympathies to the families and friends of the warriors who were killed”.

Trump said the Saudi King told him that “this person in no way shape or form represents the feelings of the Saudi people who love the American people”.

Timothy Kinsella, the base commanding officer, said he was “absolutely in awe of the response” to the attack.

“There was some real heroism today,” he said. “I’m devastated. We are in shock. This is surreal, but I couldn’t be prouder to wear the uniform that I wear because of my brothers and sisters in uniform, civilian or otherwise, that did what they did today to save lives.”

An investigation was taking place and names of victims would not be released until next of kin had been notified, the US Navy said in a statement. (Int’l News Desk)