TEHRAN/ RIYADH/ WASHINGTON: Leader of the Islamic Revolution Ayatollah Seyed Ali Khamenei highlighted the religious commonalities between the Iranian and Iraqi nations and said enemies’ conspiracies to sow discord between the two countries have been thwarted.

Addressing a ceremony in Tehran on Wednesday to commemorate Iraqi nationals who host pilgrims from around the world in the Arab country during the Arbaeen season, Ayatollah Khamenei said, “The great march of Arbaeen is a divine sign that indicates God’s will to help the Islamic Ummah (community).”

The Leader described the Iraqi people’s welcoming of Arbaeen pilgrims and their hospitality as “unparalleled” and expressed gratitude to the Arab country’s nation and government for their moves to prepare the ground for the “massive” event.

The peoples of Iran and Iraq are two nations whose hearts and souls are tied together, Ayatollah Khamenei said, adding that enemies made extensive efforts to create divisions between the two nations.

However, the Leader added, with the grace of God, the enemies have not been able to do so because the main link between the two peoples is the faith in Almighty God and the love for the family of Prophet (PBUH), particularly Imam Hussein (AS).

Elsewhere in his address, Ayatollah Khamenei referred to the slogans chanted by attendees about the defeat of the US and the Zionist regime of Israel, and said, “With the grace of God, these slogans will be realized and the Islamic Ummah will defeat its enemies in the not too distant future.”

Iran and Iraq also agreed to raise the level of services and facilities for the pilgrims and enhance border security during the Arbaeen season, which will culminate in a large gathering in Karbala on October 19.

Arbaeen, one of the largest religious gatherings in the world, comes 40 days after Ashura, the martyrdom anniversary of Imam Hussein (AS), the third Shiite Imam.

Each year, a huge crowd of Shiites, including Iranians, flock to the Iraqi city of Karbala, where the holy shrine of Imam Hussein (AS) is located, to perform mourning rites. 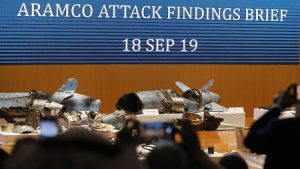 Earlier, Saudi Arabia said strikes on its oil infrastructure came from the “north” and were “unquestionably” sponsored by Iran, but the kingdom was still investigating where exactly they were launched from.

Showing debris from the alleged weapons used at a press conference on Wednesday, a defence ministry spokesman said there was no way the attacks could have been launched from Yemen, as claimed by the Iran-aligned Houthi rebels.

Al-Malki said a total of 18 drones and seven missiles were launched, including what he called Iranian Delta Wing unmanned aerial vehicles (UAVs).

Saudi officials said the missile on display, which had what appeared to be a jet engine attached to it, was a land-attack cruise missile that failed to explode.

“The attack was launched from the north and unquestionably sponsored by Iran,” he told reporters. “We are working to know the exact launch point.” 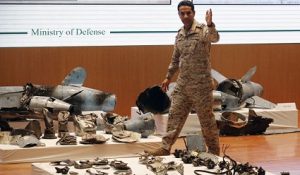 Al-Malki said the cruise missiles had a range of 700km (435 miles), meaning they could not have been fired from inside Yemen. He played surveillance video he said showed a drone coming in from the north.

“This is the kind of weapon the Iranian regime and the Iranian IRGC are using against the civilian … facilities,” he said, using an acronym for Iran’s paramilitary Revolutionary Guard Corps.

However, al-Malki did not directly blame Iran for the attack when asked by journalists. He said once “the culprits” were definitively identified they would “be held accountable”.

Iran has denied involvement and warned the United States it would retaliate “immediately” if targeted over the attacks.

“The press conference proved that Saudi Arabia knows nothing about where the missiles and drones were made or launched from, and failed to explain why the country’s defence system failed to intercept them,” Hesameddin Ashena wrote on Twitter. 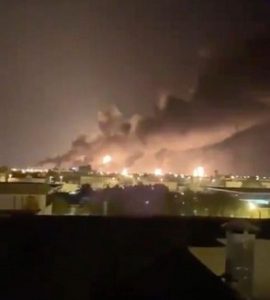 Tehran has stuck with its account that the Houthi rebels were responsible, with Rouhani saying on Wednesday they carried out the attack as a “warning” about a possible wider war in response to the Saudi-led intervention in Yemen.

But al-Malki said: “Despite Iran’s efforts to make it appear so”, the attack did not originate from Yemen, it was beyond the capabilities of the Houthi militia – who have, however, mounted dozens of smaller attacks on Saudi territory.

Andreas Krieg, a lecturer at King’s College London, told Al Jazeera the Saudi news conference was an attempt to explain some of the unanswered questions surrounding the attack.

“Questions have been asked as to how it was possible for all these strikes to be pinpoint accurate and hit the targets as they did, considering Saudi Arabia has obvious air defence umbrellas in place. One explanation is they were watching out for missiles and incoming fire from the south and not the north,” said Krieg.

Krieg called the news conference “a battle of the narratives”.

“The Saudis are trying to make a case and trying to get sympathy from the international community,” he said. “Most importantly, they are speaking out to Washington knowing fully well that the Trump administration does not want to get sucked into a military confrontation in the area.” 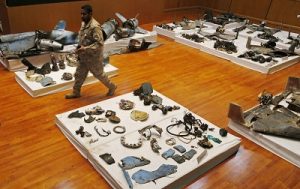 At a press conference about 30 minutes after the Saudis’, the Houthi rebels threatened to hit major cities in the United Arab Emirates (UAE) – the Saudis’ main coalition partner in the war in Yemen.

“We announce … we have dozens of targets in the UAE – among them Abu Dhabi and Dubai – and they can be targeted at any moment,” said Yehia Sarea, a Houthi military spokesman.

“If you want peace and security for your facilities, and towers made of glass that cannot withstand one drone, then leave Yemen alone.”

He also refuted that the rebels were not responsible for launching the strikes from inside Yemen.

“This operation was an example of how our military plans, develops and executes operations deep inside the aggressors’ countries,” Sarea said.

He showed satellite images of the stricken Saudi facility and said the damage done was much more extensive than what the Saudis and Americans have claimed.

The drones deployed were indeed capable of flying 700km and “very accurate” in launching precision strikes, he added.

“The fires burned for 12 hours and the aggressors couldn’t control them. The destruction is much bigger,” Sarea said. 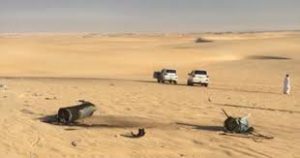 On Saturday, the attack struck the world’s biggest oil processing facility in Saudi Arabia, as well as an oil field, taking out about six percent of global oil supplies.

Crown Prince Mohammad bin Salman, Saudi Arabia’s de facto ruler, said the strike on the heart of the kingdom’s oil industry was a “real test” of global will.

The US has said its military was “locked and loaded”, suggesting it may retaliate against the perpetrators of the attacks on its closest Middle Eastern ally.

US Secretary of State Mike Pompeo met the crown prince in Saudi Arabia on Wednesday.

The Saudi news conference came after Iran warned the US it will retaliate “immediately” if Tehran is targeted, its state-run news agency reported, further raising Gulf tensions.

Iran sent a message through Swiss diplomats in Tehran on Monday, reiterating that Tehran denies being involved in the Saudi attack, IRNA reported. The Swiss have looked after American interests in Tehran for decades.

“If any action takes place against Iran, the action will be faced by Iran’s answer immediately,” IRNA quoted the message as saying. It added Iran’s response would not be limited to the source of the threat, suggesting it would inflict damage beyond what it had suffered. 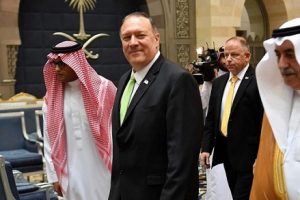 In Tehran, Rouhani told his cabinet Saudi Arabia should view the attacks as a sign to end its devastating war in Yemen, where it has fought the Houthi rebels since 2015 and sought to restore the internationally recognised government.

Rouhani said Yemenis “did not hit hospitals, they did not hit schools or the Sanaa hazaar,” referring to the Saudi-led coalition’s widely criticised air raids on civilian targets.

Tens of thousands of Yemenis have died in the disastrous war, which the United Nations has described as the world’s worst humanitarian situation.

Rouhani said Iran does not want conflict in the region, but it was the Saudi-led coalition that “waged the war in the region and ruined Yemen”.

Reiterating that the Houthis were responsible for Saturday’s strike, he said: “They attacked an industrial centre to warn you. Learn the lesson from the warning.”