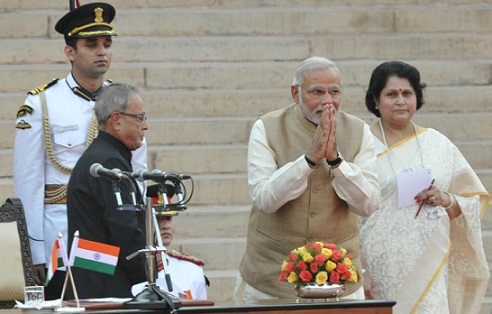 ‘Modi may look to China’s actions in Xinjiang and Tibet’ 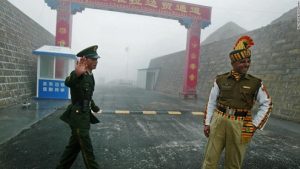 This is Xinjiang, where thousands of kilometers of rail have connected one of China’s most remote areas to the country’s wealthy center and east coast, bringing with it billions of dollars in investment and hundreds of thousands of tourists. It’s also pulled the region closer and closer, increasing government control and cracking down on any suggestion that Xinjiang, which has a history of independent and autonomous rule, could break away from China.

That has involved a two-pronged approach of increased investment, along with greater migration by Han Chinese, who have become the majority in some areas, particularly urban centers, and massively skewed the demographics of the region in Beijing’s favor.

Across the Himalayas, residents of Indian-controlled Kashmir may be looking nervously at Xinjiang — as well as Tibet, where similar policies have been pursued by Beijing – after Delhi scrapped the region’s special status, setting the stage for greater Hindu migration to the Muslim-majority area. 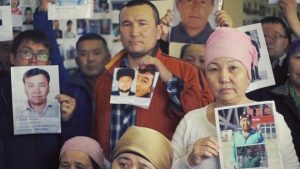 Kashmir and Xinjiang share many similarities. Both have long been regions of disputed sovereignty, where a predominantly Muslim minority has pushed against control by a non-Muslim state, and both are now facing increased pressure in countries once committed to multiethnic pluralities that have taken a turn for majoritarian assimilation.

The Chinese government has repeatedly maintained camps in Xinjiang are voluntary “vocational skills education and training centers,” and has denied accusations it restricts Uyghur culture, language or religion.

Right-wing Hindu groups have long called for settlement in Jammu and Kashmir, the only Indian state where Muslims are in the majority, and they may happily support the type of anti-Islam policies Beijing has been accused of in Xinjiang, now that special protections have been lifted for Kashmir’s traditional population. 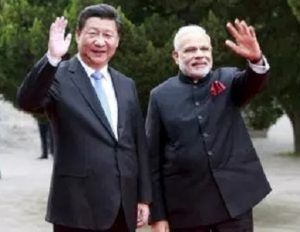 In particular, many Hindus want to see the return of the Kashmiri Pandits, Hindu residents of the valley who had to flee Islamist violence in the 1990s. Hundreds of thousands of Pandits remain displaced to this day, and their fate has become a major driver of the changing of Kashmir’s protected status.

For Indian Prime Minister Nerendra Modi — who has been accused of condoning violence against Muslims in the past — the model advanced in China is an attractive one: Beijing has not only increased its control of its restive western regions, but has also seen economic payoff, with both Tibet and Xinjiang experiencing major growth and booms in tourism — something that would be welcomed by some in Kashmir, one of India’s poorest states. 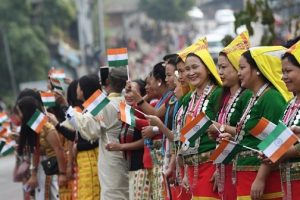 Following the Communist victory in the Chinese civil war, Beijing moved to shore up control of Xinjiang and Tibet, sending People’s Liberation Army (PLA) troops into the regions in 1949 and 1950 respectively.

Beginning in 1980 and ramping up in 1999 with the Western Development policy, China has poured billions of dollars into developing Tibet and Xinjiang. Xinjiang is also a key in Chinese President Xi Jinping’s signature Belt and Road Initiative, which has seen further investment in the region, setting it up to be a gateway to markets in central Asia and beyond.

According to official statistics, from 1978 to 2018, Xinjiang’s GDP increased by a factor of almost 300 to $168.6 billion. GDP growth in 2017 was around 7.2%, higher than the national average, with more than 100 million tourists visiting the province, largely from China. 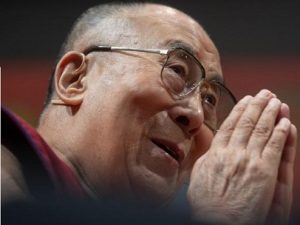 Tibet too has seen great economic success, the region’s GDP has risen by an average of 12% since the Western Development policy began almost two-decades ago, according to academic Ben Hillman. Last year, GDP reached $22 billion — and following the establishment of a direct high speed rail link, tourist arrivals topped 33 million, with the capital Lhasa seeing 19 million visitors alone.

Economic growth has not been equally shared, however, and the flood of tourists has been accompanied by an influx of Han Chinese migrants who have massively changed the demographics of Xinjiang and Tibet.

In the former, Uyghurs, who historically were the dominant ethnic group in Xinjiang and twice formed breakaway republics outside of Chinese control, are now a minority in the region, a situation more pronounced in urban areas and the economically booming northeast. 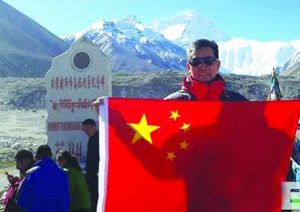 China’s first census for Xinjiang, in 1949, recorded a population of 4.87 million, 75% of whom were Uyghurs, compared to 6% Han. By 1964 the population had jumped to 7.44 million, with Uyghurs still in the majority at 54%, but the growth was largely driven by Han incomers, who now stood at 33% of the total. By 2000, 45% of Xinjiang’s now 18.46 million population were Uyghur, compared to 40% who were Han, a proportion which has remained largely stable across the region, even as Han presence in the cities has grown.

Tibet too, while remaining a predominantly Tibetan region, has seen major demographic shifts. In urban areas — particularly the capital Lhasa — numbers of Han Chinese have grown significantly, and some Tibetans have found themselves priced out of areas and unable to find employment, particularly in the increasingly booming tourist industry, Hillman wrote in a report for The Asia-Pacific Journal. 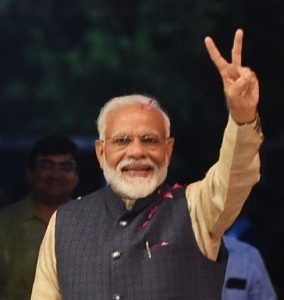 The International Campaign for Tibet (ICT), an NGO with links to the Tibetan government in exile, has argued that economic and migration policies favoring Han “have deprived Tibetans of control over their own future and threaten to make them a cultural, if not demographic, minority in their own land.”

The effects of migration on historic populations has been compounded by assimilatory policies which allegedly seek to Sinicize non-Han populations and reduce the influence of traditional religion, culture and language in the region.

Tibetan and Uyghur activists have been arrested, and those who attempt to protect traditional culture and language have faced accusations of advancing separatism and difficulty chasing funds. In Xinjiang, dozens of mosques have been bulldozed, long beards and face veils have been banned, as has “choosing names in an abnormal way,” seen as a reference to using Islamic names such as Mohammed. 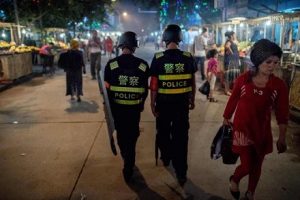 Chinese public servants have carried out mandatory home stays with Uyghur families to help the Xinjiang residents “assimilate,” and watch for frowned-upon religious or cultural practices.

In a white paper last month, Beijing said Uyghurs “conversion to Islam was not a voluntary choice made by the common people, but a result of religious wars and imposition by the ruling class,” in an apparent attempt to justify restrictions on the religion.

This echoes claims made by hardline Hindus in India that Islam was imposed on the country from outside and is not an Indian religion in the same sense as Hinduism, Sikhism or Buddhism. Hindu groups have also sought to downplay the role of the Muslim Mughal Empire in the country’s history. 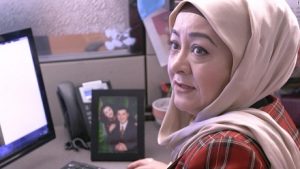 Increased control of ethnic minorities in Xinjiang and Tibet has been accompanied by intense securitization of the regions, a situation not unfamiliar to people in Kashmir, where the recent change in political status was followed by a massive influx of soldiers and a blackout on internet and phone access.

Top Chinese Communist Party official Chen Quanguo has been responsible for security policies in both of China’s western regions. As Party Secretary of Tibet from 2011 to 2016, Chen rolled out mass surveillance and cracked down on expressions of Tibetan identity, religion or language. According to the ICT, his administration oversaw a “campaign to reduce ethnic difference by accelerating assimilation and building a dense security architecture to reinforce this process.”

In Xinjiang, where Chen took over as top official in 2016, Uyghur identity has been similarly controlled, with former detainees saying camps feature torture and forced political re-education under the threat of violence. 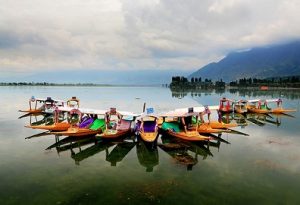 Shohrat Zakir, the top-ranking Uyghur Communist Party official in Xinjiang, recently defended the camps as voluntary “de-radicalization” centers and said most detainees “have already gone back to society.”

Changing demographics have not gone without incident in China’s border regions. As well as complaints about “cultural genocide” and lobbying for international pressure on Beijing, there have been explosions of violence in both Tibet and Xinjiang.

In 2008 and 2009, both regions saw major ethnic riots, followed by intense crackdowns. Chinese authorities linked Islamist extremists in Xinjiang to terrorist attacks there and in other parts of China, which have claimed the lives of dozens of people. In Tibetan regions of China, Buddhist monks and nuns have set themselves on fire in protest against Chinese policies.

The intense securitization advanced by Chen in first Tibet and then Xinjiang has served to reign in this violence, and both regions are now stable — if tightly controlled and anything but relaxed. 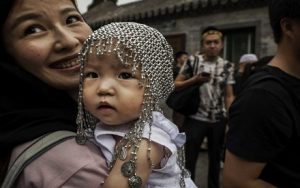 Kashmir has a long history of unrest and terrorist activity, and any Hindu influx to Kashmir will likely require large amounts of security, with settlers living in protected enclaves similar to those created by Jewish settlers in the occupied Palestinian territories. Any return of the Kashmiri Pandits for example, many of whom had to flee threats of violence previously, would have to be done under heavy guard.

Tens of thousands of new troops have been deployed to Kashmir, already one of the most militarized places in the world. A broad communications blackout left many people without access to the internet and phone services across the territory, with measures also in place to prevent public meetings.

Hindu nationalists may consider any price for a fully Hindu nation worth paying. And looking across the border at China, where Han assimilation has been accompanied by greater security and economic growth, it might be a price that doesn’t seem so high. (Int’l Monitoring Desk)