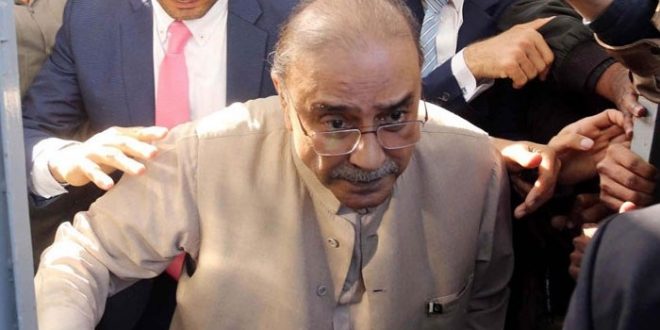 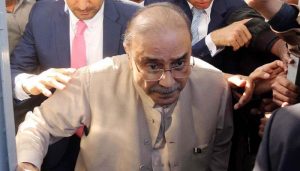 Pakistan People Party (PPP) Co-Chairman was taken into custody from Zardari House Islamabad. He has shifted to NAB headquarters, where special room has been prepared for him.

Zardari will be presented before the court on Tuesday, where NAB will pray for his remand.

The NAB team did not arrest Faryal Talpur (sister of Asif Ali Zardari) though.

A two-member bench comprising Justice Aamir Farooq and Justice Mohsin Kiani of the IHC gave the verdict on the petitions after hearing arguments from both sides.

During hearing, NAB Additional Prosecutor General Jahanzeb Bharwana pleaded that it was a matter related to the transaction of Rs4.5 billions.

The NAB was fully authorized to arrest any accused for investigation purpose under in light of the Supreme Court orders. 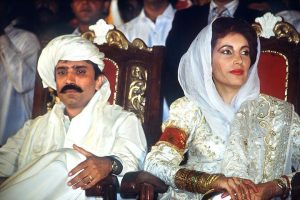 He prayed the court to dismiss the bail petitions of accused persons and said NAB investigation related to 28 other fake accounts was still under process.

On May 30, the same bench conducted hearing of the petitions moved by the leaders of PPP and extended their bails till June 10.

On the other side, Asif Zardari and Bilawal Bhutto Zardari (son of Asif Ali Zardari) have started consultations with their legal team, sources said.

Sources said Asif Ali Zardari wanted to be taken into custody from the Parliament House.

Sources further said Pakistan People’s Party has decided to file appeal against the judgment of IHC. 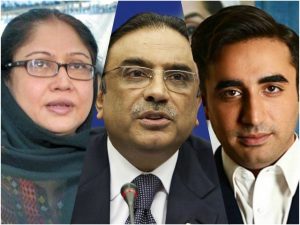 He said “We are waiting for detailed verdict of the IHC therefore, the Jiyalas (PPP workers) must show restrain.”

Murtaza Wahab, advisor to Sindh Chief Minister on Information said PPP Central Executive Committee is meeting today to chalk out the future line of action in the light of detailed verdict of the IHC.

This was also confirmed by Bilawal House Spokesperson.

Opposition leader in the NA Shahbaz Sharif, who recently returned from London, demanded to issue production orders of Asif Ali Zardari in the National Assembly.

Demanding the production orders, Shahbaz Sharif said NAB should have appreciated cooperation of Zardari who regularly appeared before the anti-graft body to answer the questions instead of playing delaying tactics.