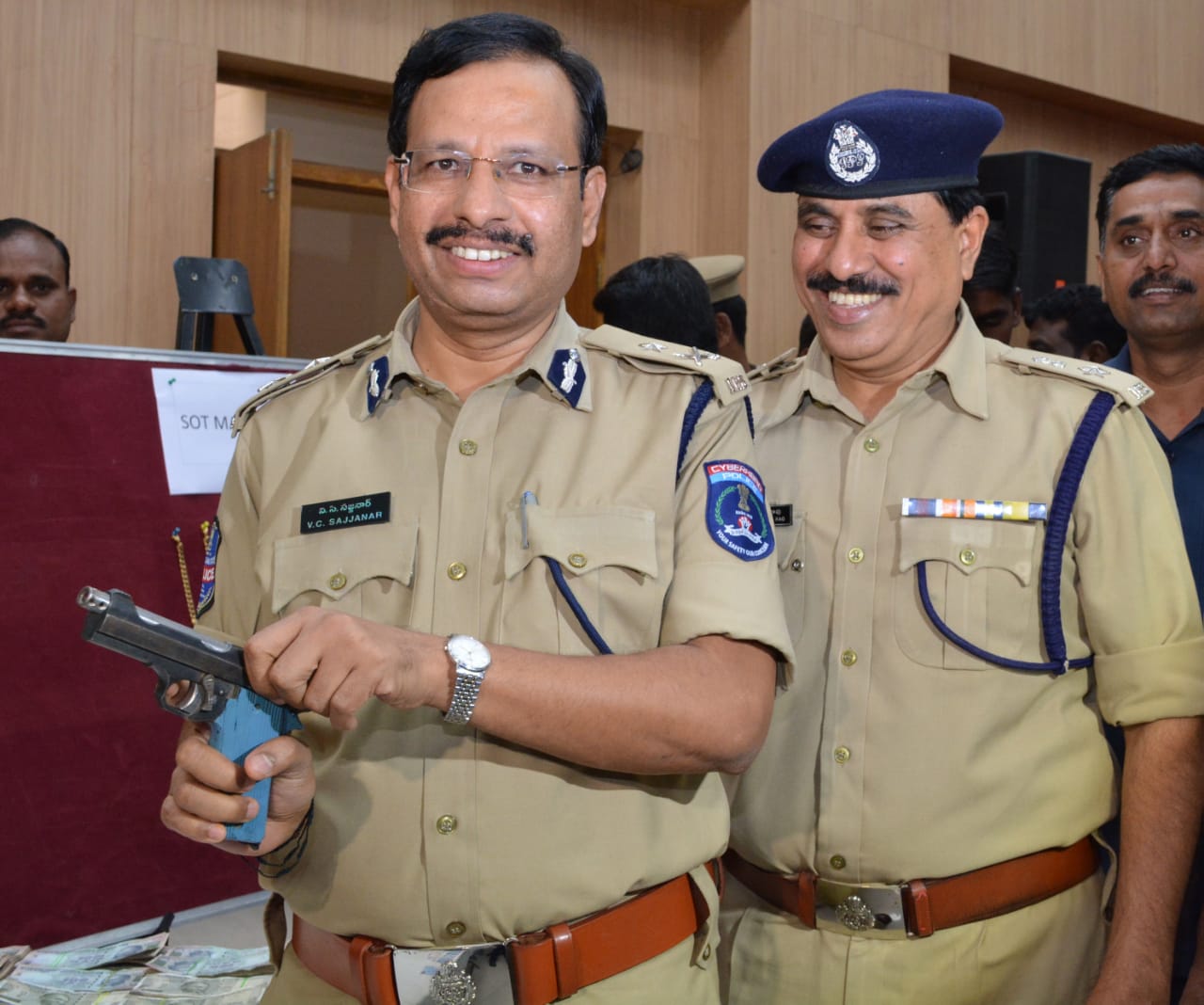 APPREHENSION OF ACCUSED INVOLVED IN US DOLLARS ROBBERY CASE 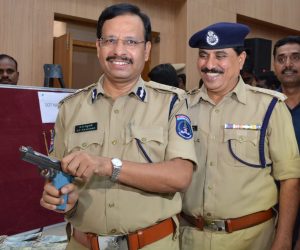 Hyderabad agust 10- On 26.7.2018 at about 7.20 pm, one Mohd. Jaffar r/o. H.No: 19-2-21, Kalapathar, Hyderabad city had reported in Narsingi police station that one person said to be Ahmed Ali @ Arman Sayyed requested him to bring 30,000 US Dollars to Café Coffee Day near Gachibowli Flyover as he is indented to exchange them for Indian Currency. When he went to said place with 30,000 US Dollars on 26.7.2018 at about 4.00 pm, said person told him to get in to a Red colour car brought by him and took him near to TSPA Junction exit on ORR, stopped the car and took 30,000 US Dollars from him and gave him a notes bundle resembling to 2000 rupees denomination Indian currency. When he tried to check the bundles, said person threatened him by showing gun like object and pushed him out of the car and fled away. Immediately the Madhapur Zone SOT and Police Narsingi were directed to identify the accused responsible for 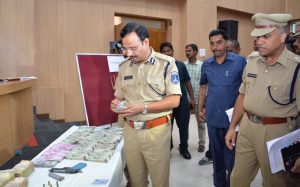 this incident and to nab him.
I). IDENTIFICATION AND ARREST OF ACCUSED:
The Madhapur Zone SOT led by Purushotham Inspector and Narsingi & Raidurgam police have swing into action immediately and tracked the CCTV footage of the accused and collected the pictures of accused and vehicles used by accused for committing this offence. It was observed that on the day of offence at 12.40 hours, accused came up to ITC Kohinoor Hotel, Madapur by Auto Rickshaw, collected a Maruti Swift car bearing registration number AP-20-AA-3555 from one Nawaz of Shamshabad in front of ITC Kohinoor Hotel, Madapur and went to Cafe Coffee Day shop at Vinayak Nagar, Gachibowli at 12.50 hours by same car and met Shaik Mohin Ali, Auto Rickshaw driver. After some time, he left said place by said car and again went up to ITC Kohinoor Hotel, Madapur and he again met Nawaz infront of said hotel. He returned Maruti Swift Car to Nawaz, Collected a new Red colour Maruti Brezza car bearing T/R number (not visibe) and went to Cafe Coffee Day shop located near Flyover Gachibowli. Where, he met the victim Mohd.Jaffer and both left by said Red colour Maruthi Brezza Car and went towards Airport on ORR. His vehicle picture was captured in the ORR Toll Plaza at 16.03 hours. After committing the offence he went upto Shamshabad and entered in the city through Shamshabad Exit of ORR and from there it was become difficult to track him further. During the investigation it came to be known that accused is frequently staying in Star Hotels in Cyberabad limits, Bangalore, Udipi, Mangalore of Karnataka state, besides that, it also came to know that accused was also having some connections with Karad & Nagpur of Maharastra. The Madapur Zone SOT visited all such hotels and places and collected further details / visuals of accused. Further they also came to know that accused own a Toyota Innova SUV car bearing Registration number TS-07-EV-3178. With the available inputs, the Madhapur Zone SOT, Raidurgam and Narsingi police worked out and zeroed down the movement of accused.
With continuous and sustained efforts, they have apprehended the accused on 9.8.2018 at 16.00 hours at Hydershahkote while he was moving by his Toyota Innova SUV car bearing Registration number TS-07-EV-3178 and seized one country made pistol, seven live rounds of ammunition, Toyota Innova SUV car etc. from him. He was thoroughly interrogated and during which he revealed many important points about him & his criminal activity/history to police and made further seizures. The details are:
II). DETAILS OF ACCUSED:
Siddiqui @ Suleman Mohammed Khan s/o. Mohammed Khan, aged 42 years, r/o. Flat No: 210, V.K. Residency, Kandi (v), Sangareddy District, N/o. 3rd floor, Flat No 310, Swapna Apartment, Althin, Mapusa, Bardez, Goa. He moved with different names in different places to hide his identity, they are:
(1). Sahil Ali Khan (2). Mohammed Ali Khan (3). Aahil Mohammed Ali Khan (4). Aahil Daniel Sayyad (5). Sameer Patel (6). Sihan Arman Shah (7). Arman Rahil Shah, (8). Suresh Chawan, (9). Siddique Khan, (10). Sulaiman Khan, (11). Khan Sahil Ali Mohammed Ali (12). Ishan (13). Asma Khan
III). PROFILE & PREVIOUS HISTORY OF ACCUSED

 He was born in Althin, Mapusa, Bardez, Goa in the year 1974. His father was a Sand Contractor. He is having two brothers and five sisters.
 He is illiterate, but he is able to attest his signature.
 In the year 1989 started his life as a labour under centering mason in Mapusa , Goa. Later after 1992, he became Centering mason.
 In the year 1995 he become a centering works contractor.
 In the year 2001, he took sub-contract works related to Goa Film Festival from Digamber Kamath, a Class-I contractor and completed the works in the year 2003.
 He earned huge amount of money as profit in this work and invested the same money in buying open land in Tivim Mordel, Goa.
 After this work he did civil contract works in different places of Goa and also entered in construction field and earned good profits in all these works. He invested the money earned out of the profits of his civil works in purchasing open lands in different parts of Goa. In this manner he has purchased about 26 properties which include open lands and Antique houses in different parts of Goa.
 Because of recession between 2007 and 2009, the Real Estate Market collapsed in Goa. At that time he was having some good amount with him, so he left for Karad of Maharastra, purchased some land with that amount and started Real Estate and construction business in Karad. He built a house in Karad, but later it was sold. While he was in Karad, he married a woman of Bijapur of Karnataka state.
 As the business in Karad was not up to his expectations, in the year 2011, he went to Pune along with his family, settled in Hatti Chowk, Khatraj area of Pune and did Real Estate and construction business till 2012. During this time, he developed some ill-feelings with one Gajanan Marne, a dreaded Gangster of Pune over sale & purchase of lands and at the same time he has cheated one Vimal Rao Konde Deshmukh of Pune over sale & purchase of a land and coming to know the registration of a criminal case and differences with Gajanan Marne he left Pune and went to Bangalore to avoid his arrest by police.
 After this, some ill-feelings developed with his wife and she left him by leaving her 2 years old female child.
 From Pune he went to Bangalore, where he purchased a flat and married another woman belong to Honnawar of Karnataka state and he is blessed with a female & male child to her. Later his first wife lodged a complaint before police against him. Police came to Bangalore in search of him. Then he left Bangalore and went back to Goa.
 While he was in Goa he was arrested by Pune police in the cheating case registered against him. He was in Eravada jail for about 100 days and later released on bail.
 After releasing from jai,l he purchased a country made pistol and ammunition in Pune from one Suresh Bhosle of Pune and in this regard also a case was registered against him and he is not yet arrested in this case. 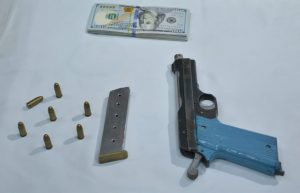  He again went to Goa and while in Goa he purchased a land from one lady Louisa Fernandez of 75 years old, but due to some valid reasons said lady cancelled his sale agreement and was trying to sell the land to some other person. On that on 30.07.2014, he engaged five persons and killed her by injecting some poisonous substance into her body.
 All his associates were arrested in this murder case and they revealed his name to police. Then he escaped from Goa along with his family to avoid Police arrest and since then he is wanted by Goa Police in this murder case.
 He went to Mangalore of Karnataka state and Calicut of Kerala state and stayed for about (9) months. Later he shifted his residence to Nagpur of Maharastra state in the year 2015.
 In Nagpur he stayed in a rented house and opened a real estate broker office and did some property dealings as an agent. When he was in Nagpur he also came to Hyderabad stayed in Hyderabad for few months in a rented house in Begumpet and got Voter ID Cards to him and his wife and also birth certificate to his eldest daughter on fake names.
 In the month of November, 2016 one Bharath associate of Gajanan Marne met him in Nagpur city. Then he suspected some threat to his life and thinking so he again left Nagpur and the rented house is not yet vacated. During this time he purchased a 250 Sq yards house plot in Makthal of Mahaboobnagar district for 4.5 lakhs.
 Thereafter he moved in Mangalore, Bangalore of Karnataka state and Hyderabad and involved in exchange of demonetized currency notes with new Indian currency for commission.
 During the process of exchange of demonetized currency, he came in to contact with one Muthu Swamy of Chennai through a priest of Iskcon temple Bangalore and exchanged some demonetized currency with him and later cheated him and took about 30 lakhs new currency from him.
 From November, 2016 to till the end of 2017 he cheated many people in the name of exchange of demonetized