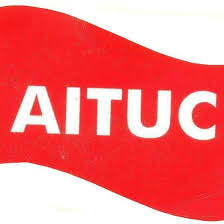 New Delhi, Feb.2 (PMI): “The BJP-led NDA government has once again attempted to throw jumlas on the face of suffering people through its Vote on Account budget. The announcements made are with forthcoming elections in mind, just throwing statistics without any basis. On one hand, it is a cruel joke on the marginal farmers, who hold land up to two hectare numbering about 86 % of total farmers in the country offering Rs 17 per family per day. The rural landless poor, who work in the fields and related agricultural activities have been offered nothing, AITUC Secretariat stated in a statement here.

“There was nothing in the budget statement to address unemployment, which reached highest in the last 45 years. Nothing was offered for job creation, no steps announced to fill the already sanctioned Central and State government posts cheating the youth once again. There was nothing in the budget for about 35 crore of unorganized sector workers other than the 10 crore workers who are covered under EPF. The working class was also betrayed contrary to the claims being made by the Prime Minister and the Finance Minister in regard to providing dignity to the workers. Nothing announced about the demand of Rs 18,000 minimum wage to workers. There was no control on price rise and the people were finding difficult to run their kitchens.

“There was no tax increase on corporates or wealth tax which was necessary to meet the present crisis-ridden economy. The hollowness of the government and its camouflaging ways were on display through this interim budget”, the AITUC statement added. (PMI)