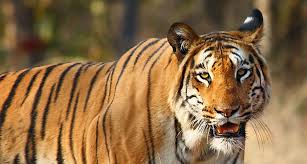 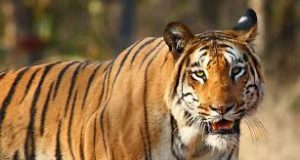 Hyderabad, July 29 (PMI): The fourth cycle of All India Tiger Estimation was conducted during January last year in all the Forest areas of Telangana, both inside and outside wildlife sanctuaries, national parks and Tiger Reserves. The exercise was also conducted in all the States. The earlier three cycles were conducted in the years 2006, 2010 and 2014. All these three estimation were conducted in the united Andhra Pradesh. This is the first time that, the All India Tiger Estimation was being conducted in Telangana. It was carried from June 23 to 30 last year in the State.
Telangana has two Tiger Reserves i.e., Amrabad Tiger Reserve falling in Nagarkurnool and Nalgonda Districts and Kawal Tiger Reserve in Nirmal, Mancherial, Adilabad and KB Asifabad Districts. While Amrabad Tiger Reserve is situated on the banks of river Krishna, the Kawal Tiger Reserve is situated on the banks of river Godavari. These, two Tiger Reserves fall in the Central India Landscape and Eastern Ghats.
In the year 2014, the tiger census was conducted for the entire NTSR spread over Andhra Pradesh and Telangana. The estimated number of tiger for the Telangana portion of NTSR was 17 and it was 3 for Kawal Tiger reserve. The estimation of tiger for Telangana region was 20 for 2014.
As per the report released on Monday on the occasion of Global Tiger Day, the Amrabad Tiger Reserve falling in Nallamala forest belt, including in core and buffer and Kawal Tiger Reserve, including core, buffer and corridor combined have a Tiger population of 26 Tigers. Increase in the number of tigers in Telangana could be achieved because of the improved management practices adopted by the staff of Forest department wherein they have concentrated on improving the water regime in the forest area and also improving the availability of grass resulting in improving the prey base.
Improved protection of forests has helped this cause to agreat extent. Support of NGOs helped the department in this respect. Presence of cubs in the both the tiger reserves is very encouraging sign of improvement of the tiger habitat and indicative of the bright future for the tiger populations.
Monitoring Effectiveness Evaluation report 2018 is an indication of the better management practices for both the Tiger Reserve. In respect of Kawal, it moved up from “Fair” to “Good”. In respect of Amrabad Tiger Reserve, it remained in Good category but the overall score is more than 71.09% which is nearer to Very Good category (75%).
CWLW Telangana congratulates all the stakeholders viz. forest department officials, NGOs, villagers living near these tiger reserves who have contributed for this success. (PMI)