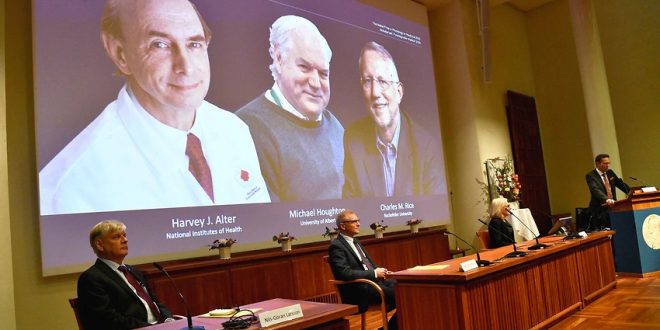 STOCKHOLM: Two American and one British-born scientist won the 2020 Nobel Prize for Physiology or Medicine for work in identifying the Hepatitis C virus, which causes cirrhosis and liver cancer, the award-giving body said on Monday. 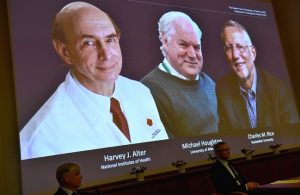 “Prior to their work, the discovery of the Hepatitis A and B viruses had been critical steps forward,” the Nobel Assembly at Sweden’s Karolinska Institute said in a statement on awarding the prize of 10 million Swedish crowns ($1.1 million). The three scientists will share the prize money.

“The discovery of Hepatitis C virus revealed the cause of the remaining cases of chronic hepatitis and made possible blood tests and new medicines that have saved millions of lives.”

Thanks to their discovery, highly sensitive blood tests for the virus are now available and these have “essentially eliminated post-transfusion hepatitis in many parts of the world, greatly improving global health”, the Nobel committee said.

“For the first time in history, the disease can now be cured, raising hopes of eradicating Hepatitis C virus from the world population,” the jury said.

The award for work on a virus comes as the world battles the new coronavirus pandemic. 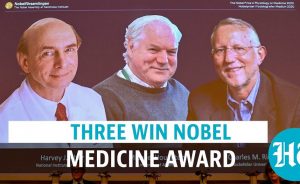 They would normally receive their prize from King Carl XVI Gustaf at a formal ceremony in Stockholm on December 10, the anniversary of the 1896 death of scientist Alfred Nobel who created the prizes in his last will and testament but the in-person ceremony has been cancelled this year due to the coronavirus pandemic, replaced with a televised ceremony showing the laureates receiving their awards in their home countries.

Last year, the honour went to US researchers William Kaelin and Gregg Semenza and Britain’s Peter Ratcliffe on for discoveries on how cells sense and adapt to oxygen availability.

The winners of this year’s physics prize will be revealed on Tuesday, followed by the chemistry Prize on Wednesday.

The literature prize will be announced on Thursday and the peace prize on Friday, with speculation that Swedish teenager Greta Thunberg and other climate activists or press freedom groups could get the nod for the latter.

The economics prize will wrap up the Nobel Prize season on Monday, October 12. (Int’l Monitoring Desk)