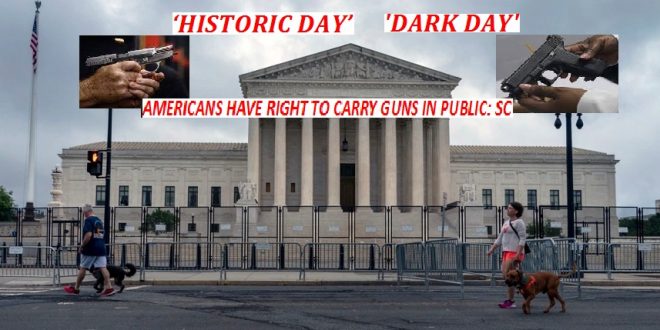 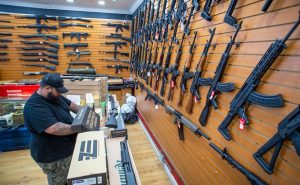 The reforms which are almost certain to be rubber-stamped by the House of Representatives on Friday, fall short of the demands of gun safety advocates and President Joe Biden, but have been hailed as a life-saving breakthrough after almost 30 years of inaction by Congress.

The Bipartisan Safer Communities Act, which was backed by all 50 Democratic senators and 15 Republicans, includes enhanced background checks for buyers under the age of 21, $11 billion in funding for mental health, and $2 billion for school safety programs.

It also provides funding to incentivize states to implement “red flag” laws to remove firearms from people considered a threat and it closes the so-called “boyfriend” loophole, under which domestic abusers could avoid a ban on buying firearms if they were not married to or living with their victim.

“Tonight, the United States Senate is doing something many believed was impossible even a few weeks ago: we are passing the first significant gun safety bill in nearly 30 years,” Senate Democratic majority leader Chuck Schumer said after the legislation passed.

“The gun safety bill we are passing tonight can be described with three adjectives: bipartisan, commonsense, lifesaving.” 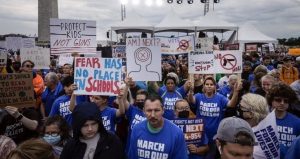 His Republican counterpart Mitch McConnell said the legislation would make America safer “without making our country one bit less free.”

“This is a common-sense package. Its provisions are very, very popular. It contains zero new restrictions, zero new waiting periods, zero mandates and zero bans of any kind for law-abiding gun owners.”

The National Rifle Association and many Republicans in both chambers of Congress opposed the bill but it is endorsed by advocacy groups working in policing, domestic violence and mental illness.

The Senate and House are on a two-week recess starting next week but the Democratic-controlled House is expected to approve the Senate’s bill with little drama before members leave town on Friday night.

The breakthrough is the work of a cross-party group of senators who have been hammering out the details and resolving disputes for weeks. 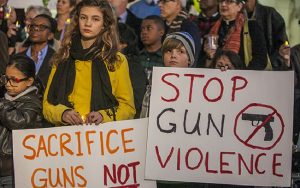 momentum generated by the fatal shooting of 19 children in Uvalde, Texas and of 10 Black people at a supermarket in Buffalo, upstate New York, both last month.

“This will become the most significant piece of anti-gun-violence legislation Congress has passed in three decades,” he said on the Senate floor.

“This bill also has the chance to prove to the weary American public that democracy is not so broken, that it is able to rise to the moment.”

The last significant federal gun control legislation was passed in 1994, introducing a national background check system and banning the manufacture for civilian use of assault rifles and large capacity ammunition clips but it expired a decade later and there has since been no serious movement on reform, despite rising gun violence.

Biden had pushed for more substantial reforms, including a reinstatement of the ban on assault rifles which were used in both the Texas and New York shootings and high-capacity magazines but 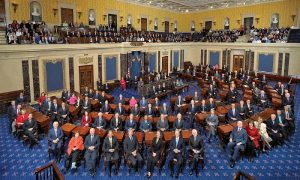 the political challenge of legislating in a 50-50 Senate, where most bills require 60 votes to pass, means that more wide-ranging reforms are unrealistic.

“The morning after the tragedy in Uvalde, the United States Senate faced a choice,” Schumer added.

“We could surrender to gridlock… Or we could choose to try and forge a bipartisan path forward to pass a real bill, as difficult as that may have seemed too many.”

The vote came as a boon for gun safety activist’s hours after they were dismayed by a Supreme Court ruling that Americans have a fundamental right to carry a handgun in public.

The 6-3 decision struck down a more than century-old New York law that required a person to prove they had a legitimate self-defense need to receive a permit to carry a concealed handgun outside the home.

The US Supreme Court ruled on Thursday that Americans have a fundamental right to carry a handgun in public, a landmark decision with far-reaching implications for states and cities across the country struggling with a surge in gun violence. 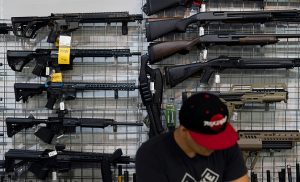 prove they had a legitimate self-defense need, or “proper cause,” to receive a permit to carry a handgun outside the home.

Several other states, including California, have similar laws and the court’s ruling will curb their ability to restrict people from carrying guns in public.

Democratic President Joe Biden denounced the decision, saying it “contradicts both common sense and the Constitution, and should deeply trouble us all.”

“We must do more as a society, not less, to protect our fellow Americans,” Biden said. “I call on Americans across the country to make their voices heard on gun safety.”

Despite a growing call for limits on firearms after two horrific mass shootings in May, the court sided with advocates who said the US Constitution guarantees the right to own and carry guns.

The ruling is the first by the court in a major Second Amendment case in over a decade, when it ruled in 2008 that Americans have a right to keep a gun at home for self-defense.

It was a stunning victory for the National Rifle Association lobby group, which brought the case along with two New York men who had been denied gun permits. 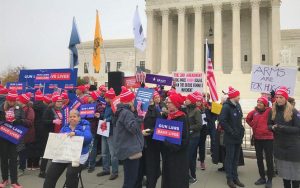 “Today’s ruling is a watershed win for good men and women all across America and is the result of a decades-long fight the NRA has led,” NRA executive vice president Wayne LaPierre said in a statement.

“The right to self-defense and to defend your family and loved ones should not end at your home.”

“It is outrageous that at a moment of national reckoning on gun violence, the Supreme Court has recklessly struck down a New York law that limits those who can carry concealed weapons,” Hochul said.

“This is a dangerous decision from a court hell bent on pushing a radical ideological agenda and infringing on the rights of states to protect our citizens from being gunned down in our streets, schools, and churches,” Newsom tweeted.

Justice Clarence Thomas wrote the majority opinion and was joined by the other five conservatives on the nine-member court, three of whom were nominated by former Republican president Donald Trump. 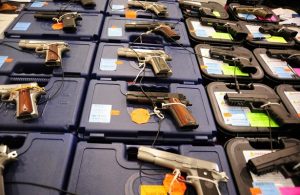 “We conclude that the State’s licensing regime violates the Constitution,” Thomas said.

The ruling comes as the US Senate is considering a rare bipartisan bill that includes modest gun control measures.

Democratic Senator Dick Durbin said the ruling “makes it all the more important for Congress to take actionable steps to protect our kids and communities from this nation’s gun violence epidemic.

“In a nation of almost 400 million firearms, this Supreme Court decision is an invitation for more gun deaths and chaos in America’s neighborhoods,” he said.

On May 14, an 18-year-old used an AR-15-type assault rifle to kill 10 African Americans at a supermarket in Buffalo, New York.

Less than two weeks later 19 children and two teachers were shot and killed at an elementary school in Uvalde, Texas, by another teen with the same type of high-powered, semi-automatic rifle. 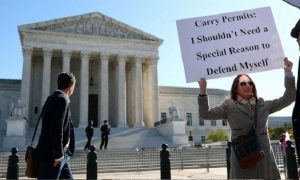 In the decision, Justice Samuel Alito dismissed arguments that guns outside of homes lead to great violence, including when it comes to mass shootings.

“Why, for example, does the dissent think it is relevant to recount the mass shootings that have occurred in recent years?,” he wrote.

The New York law said that to be given a permit to carry a firearm outside the home, a gun owner must clearly demonstrate that it is explicitly needed for self-defense.

Gun-rights advocates said that violated the Second Amendment of the Constitution, which says “the right of people to keep and bear arms shall not be infringed.”

The three liberal justices on the Supreme Court dissented from the ruling.

“Many states have tried to address some of the dangers of gun violence,” Justice Stephen Breyer said. 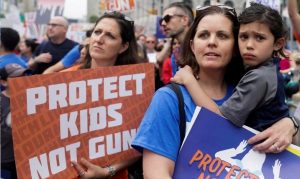 “The Court today severely burdens states’ efforts to do so.”

More than half of US states already allow permit-less carry of firearms, most of them only doing so in the past decade.

The New York state law dated to 1913 and had stood based on the understanding that individual states had the right to regulate gun usage and ownership.

Over the past two decades more than 200 million guns have hit the US market, led by assault rifles and personal handguns, feeding a surge in murders, mass shootings and suicides.