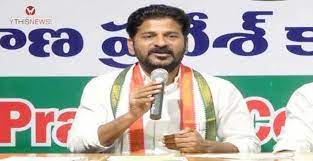 Hyderabad, Jan.29 (PMI): Accusing the KCR Government in Telangana and Modi Government at the Centre of ruling the people by fear, Telangana Pradesh Congress Committee (TPCC) President & MP A. Revanth Reddy on Saturday alleged that both TRS and BJP were seeking political gains over dead

H bodies of victims of their wrong policies. He made a fervent appeal to the teachers,  employees, farmers and jobless youth not to resort to any extreme step like suicide due to the wrong policies of TRS and BJP Govt and assured that the Congress party would fight for their rights and get justice under any circumstances.

Revanth Reddy was addressing a press conference in Mahabubabad after meeting the families of a government teacher, a jobless youth and a Dalit and Girijan farmers who lost their lives due to heart attack or suicide due to the wrong policies of TRS Govt.

The TPCC Chief first visited the family members of Jaitram Naik, a government school teacher who died due to a heart attack following his transfer to another district as per GO 317. Jaitram was posted in his native Chinnamupparam village of Nellikudur Mandal in Mahabubabad district. He was depressed after he was transferred to the Mulugu district due to GO 317.  He said that the authorities did not stop his transfer even on medical grounds as he had suffered a paralytic attack.

Revanth  said he wanted to visit the family immediately after learning about Jaitram Naik’s death. But he was detained by the police in Hyderabad and not allowed to visit Mahabubabad. However, he said he consoled the family members over the phone and assured them to visit them soon.

The TPCC Chief blamed both TRS and BJP Govts for the controversial GO 317 which claimed many lives of teachers and employees in the last one month. He said that the TRS Govt has turned so inhuman that the authorities did not consult Jaitram’s family even after one month of his death. He also spoke to the District Collector requesting him to do justice with the Jaitram’s family.

Revanth Reddy said BJP and TRS were equally responsible for issuing controversial GO 317. He said that the new zonal system was approved by the BJP Govt at the Centre and KCR Govt later issued GO 317. He said that Union Minister G. Kishan Reddy and Telangana BJP President Bandi Sanjay could get GO 317 cancelled by making a representation to the President of India as the order was passed as per the Presidential Order. However, he said that BJP leaders want more employees and teachers to die due to stress or suicide so that they could make political gains.

TPCC Chief appeals to teachers, farmers and youth not to commit suicide

Similarly, he said that CM KCR was blaming the BJP Govt for the non-procurement of paddy while indirectly forcing the farmers to commit suicide. He wants to gain mileage by blaming the Modi Govt. He said neither TRS, nor BJP have any respect for human lives and both want to draw political mileage over dead bodies.

Revanth Reddy said a jobless youth Mutyala Sagar of Bayyaram committed suicide by jumping in front of a train near Khammam Railway Station on 25th January. He said Sagar’s father was a Hammali and his mother works as an agricultural labourer. He was depressed over remaining unemployed for the past three years and he had also posted a message in his WhatsApp status blaming Chief Minister K. Chandrashekhar Rao for not issuing the job notifications. He said when an all-party dharna was held in Khammam against the suicide, the local RDO assured that the family would be paid a compensation of Rs. 50 lakh. However, the TRS Govt took a U-turn and now threatening the family and others of booking a case by calling suicide a crime.

Revanth Reddy said a Dalit and one Girijan farmer committed suicide after suffering heavy losses to their chilli crop. He said chilli crops spread across lakhs of acres in Khammam and Warangal have been lost due to an insect attack. He said both the farmers suffered huge losses and went into depression as they were unable to clear their debts. He said that the TRS Govt neither extended any help to their families nor sent a team of officials to study the causes of insect attacks on chilli crops. Their families were just left to their fate without any compensation and assistance.

Revanth Reddy said no section of the society, including youth, farmers, women, employees, teachers, farmers and labourers, were happy with the performance of TRS and BJP Govts who are ruling by fear. They have inculcated a sense of fear and insecurity among all sections. They are not concerned about the loss of lives for whatever be the reason and always focusses on making political gains, he alleged.

He also condemned the TRS Govt for not resolving the Podu land issue. He alleged that several TRS leaders got pattas issued on their names for Podu lands. He said all such leaders would be sent to jail after Congress returns to power in the 2023 elections.

Revanth Reddy said that all sections of society should punish the TRS and BJP Govts in the next elections. “Telangana will soon be liberated from the clutches of inhuman, anti-employee, anti-farmer and anti-youth TRS Govt. Congress party will bring Soniamma Rajyam for the welfare of all sections of the society in Telangana,” he promised. (PMI)

Share
Previous Centre ignored pleas for development: KTR
Next CM to direct MPs to fight in Parliament on state issues