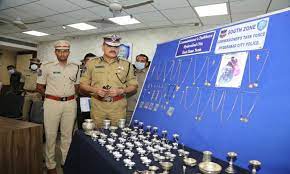 Three burglars with possessions worth 24 lakhs nabbed in Hyderabad 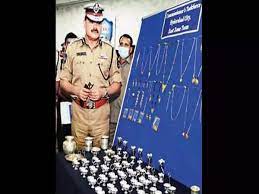 During a press conference, the Commissioner of Police Anjani Kumar stated, “The sleuths of Commissioner’s Task Force, East and South Zone Teams along with Nallakunta and Marredpally police apprehended 3 offenders, who committed house burglaries and attention diversion offences in the limits of Hyderabad, Cyberabad, Kamareddy, Nizamabad and Maharashtra State- Detected (13) Cases. Seized gold ornaments worth about 430 Grams, 2.163 KGs of Silver, Net cash Rs. 20,000/-, 02 cell phones, and one two-wheeler from their instance. All worth Rs 24,00,000.”

Police further informed that they used to conduct recce of locked houses in evening hours and in midnight they reach the target houses and searches for tools in the premises of the house.

The arrested accused and seized property were handed over to SHOs Nallakunta and Marredpally Police Station for further action, it added.

Share
Previous Mystery behind dead body found in water tank solved
Next 237 persons lost their lives in accidents in the city this year. The number was 248 last year ,CP Anjani kumat