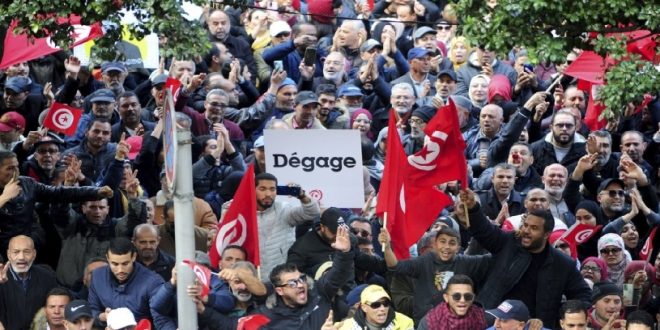 TUNIS: Thousands of protesters angry at Tunisia’s economic crisis and the president’s increasingly authoritarian drift marched on Saturday through the capital, responding to a call from opposition parties to mark 12 years since Tunisian protesters unleashed Arab Spring uprisings around the region. 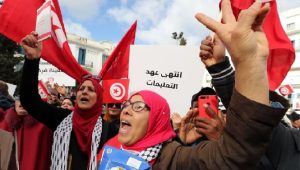 The protest move comes after disastrous parliamentary elections last month in which just 11% of voters cast ballots. The elections are meant to replace and reshape a legislature that President Kais Saied dissolved in 2021. The second round has been set for Jan. 29.

It also comes as the country is going through a major economic crisis, with inflation and joblessness on the rise. Tunisians have been hit with soaring food prices and shortages of fuel and basic staples like sugar, vegetable oil and rice in recent months.

The National Salvation Front, a coalition of five opposition parties, including the popular Islamist opposition party Ennahdha, had called for the march in central Tunis.

The Habib Bourguiba avenue, the main artery of the capital and a key site for the revolution, had been placed under high security, with metal barriers, drones and surveillance cameras in place to monitor the crowd.

Demonstrators shouting “Kais Saied, go out” and “No to dictatorship, yes to dialogue and democracy,” amid other mottos, were prevented from getting close to the Interior Ministry.

The President of the Tunisian Human Rights League, Bassem Trifi, said authorities banned protesters from other cities of the country to come to Tunis to take part in the march. 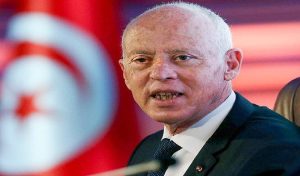 The head of the Workers’ Party, Hamma Hammami, said “Kais Saied will either end up in prison or flee abroad. His dictatorial regime will fall, like the one of ousted President Ben Ali.”

On Jan. 14, 2011, then President Zine el-Abidine Ben Ali was forced out of power, transforming the country into a budding democracy that inspired the Arab Spring. Ben Ali died in 2019.

“We are here to say ‘stop’ to the process of destruction of the state engaged by Kais Saied,” said Abassi Hammami, the head of the National Comittee for the Protection of Freedoms. “We must open new perspectives for our country.”

The head of the Republican Party, Issam Chebbi, said opponents will continue their fight to relaunch the democratic process and help the country get out of the political, economic and social crisis it is going through.

Saied, who was elected in 2019, has curbed the independence of the judiciary and weakened parliament’s powers. 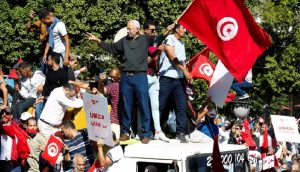 In a referendum in July last year, Tunisians voters approved a constitution that hands broad executive powers to the president. Saied, who spearheaded the project and wrote the text himself, made full use of the mandate in September, changing the electoral law to diminish the role of political parties.

In an apparent response to criticism, Saied on Friday paid a surprise visit to the Bourguiba Avenue and went through the capital’s historic district, the medina. He called for caution against “intruders and renegades” who could mix with protesters to provoke clashes.

The Jan. 14 anniversary has been abolished as an official commemoration date by Saied, who instead declared Dec. 17 as the “revolution day.” (Int’l News Desk)