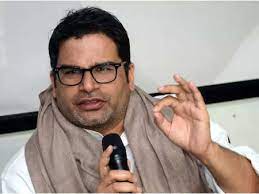 Hyderabad’April  26(PMI) The Telangana Congress’ hopes are believed to have flown down in the drain over rejuvenation of the party in the state where many party leaders including the TPCC chief Revanth Reddy anticipating that the poll strategist Prashant Kishor would join them. Soon after the announcement of Prashant Kishor of him declining the offer by Congress to join the party, the state Congress leaders are reportedly upset over the decision

The State Congress leaders were quick to respond to the reports of Prashant Kishor meeting the Chief minister K chandrashekar Rao for continuous two days at Pragathi Bhavan recently. The TPPC chief responded stating that that Political strategist Prashant Kishor met Chief Minister K Chandrashekar Rao in order to end all his relationships with the pink party. He said PK would not have any kind of alliance with the TRS party now and added that all his predictions on the issue had now become reality.

Share
Previous TSRTC unlikely to resume AC bus services in City
Next High temperatures in Telangana for next 2 day: IMD